This page is for the original 1995 game. For the 2020 remastered version, see Command & Conquer Remastered Collection.

Informally known as Tiberian Dawn.
Re-released for free in 2007.
Command & Conquer Gold: Project 1.06 fan patch is highly recommended to install.
If you want a modernized C&C experience, check out OpenRA.
Language support can be further extended with language add-ons.
CD/ISO installer is 16-bit and doesn't run under modern systems; it's better to download fanmade installers instead.

OpenRA includes a modernized open-source version with its "Tiberian Dawn" mod.
CnCNet installer is a bare-bones version optimized for multiplayer (small size, portable). Missions, music and cutscenes are omitted. The music and map editor are downloadable inside the CnCNet settings.
Nyerguds' installer is a more fully-featured version which includes singleplayer missions (including Covert Operations and PSX/N64 missions) and soundtrack from the get-go. Cutscenes are available at Mod DB. 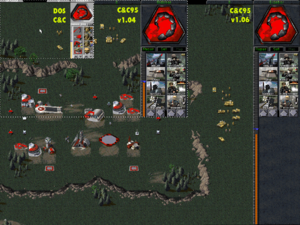 Not needed for the unofficial packages.
This patch contains:
The site also offers Music Upgrade Pack if you installed the game through CDs/ISOs.
Support for regular installation, The First Decade and The Ultimate Collection.

1.22 is the last patch for the DOS version. Note that the game's Covert Operations expansion upgrades the game to v1.20, which is not quite the same as the final v1.22. Some of the later DOS releases of the game come prepatched at v1.22.
European versions' alternate languages, German and French, have different versioning, meaning their final versions are called v1.20. This is equivalent to the English v1.22. They can be downloaded here and here.

DOS32A is a more advanced extender and open source replacement to DOS4GW. It can improve both performance and stability of Command & Conquer.

Command & Conquer has DOS4GW bound its executable. Use the command sb /r game.dat to replace it.

Allows enabling hidden options within the game. Most useful perhaps it the ability to increase the netgame player limit to 6 and allow 1v1 game with AI players. More info here.

You can boost the performance of DOSBox by running the game without the CD mounted. To do so copy the cd's contents (or at least it's most important files, SCORES.MIX and movies.mix) to a folder inside the game's virtual C drive. Launch the game with the parameter -cd[cd contents folder]. Note it is recommended to use the SCORES.MIX from The Covert Operations cd if you have the addon. You also may need to merge the different movies.mix files to get all the cutscenes, depending on your version of the game. 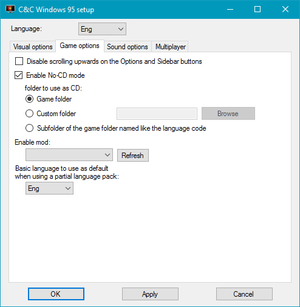 DOS save games not compatible with C&C Gold. 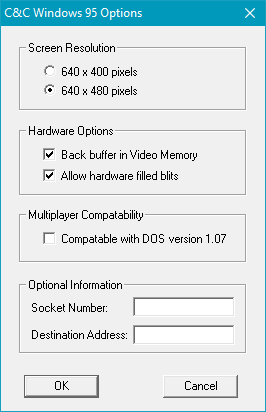 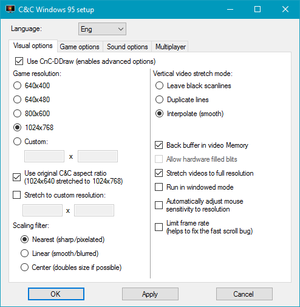 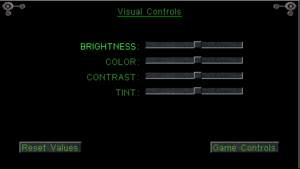 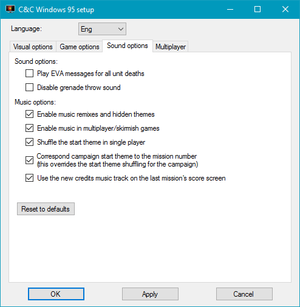 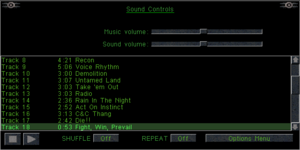 The DOS version of the game actually supports stereo sound despite not appearing as an option in the setup program. A guide explaining how to enable it can be found here. 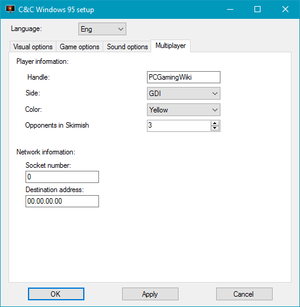 This list assumes you've installed the patches. If you experience a new issue, please create a thread at the CnC-Comm forums.

If you have problems with The First Decade or The Ultimate Collection, be sure to check this FAQ at EA forums.

Game is laggy after installing the patch[edit]

Resolved by using frame-rate limiter in the fan patch, but this may cause an unresponsive in-game menu.[citation needed]

Ddraw.dll within the fan-patch already fixes that issue. However, if the game needs to run with ddraw.dll turned off and this appears, then this is for you.

No videos after installing the patch[edit]

Thanks to dedicated C&C community, there are a couple of re-implementations and total conversion existing.