Remastered version of BioShock. Released as part of BioShock: The Collection, which also includes BioShock 2 Remastered and BioShock Infinite.
Free to owners of BioShock on Steam.[2] Purchasing this version likewise gives a free Steam copy of the original.
Includes the formerly PlayStation 3 exclusive Challenge Rooms DLC which includes new challenges, a museum, Survival difficulty and New Game+.
Audio quality downgraded. See Restore uncompressed FMV audio.
Lots of reports of entire save files lost due to frequent crashes have been issued.[3] 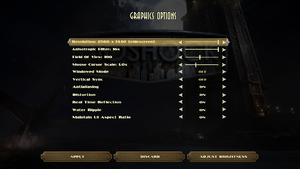 Controllers need to be unplugged or disabled in game settings for mouse to work. 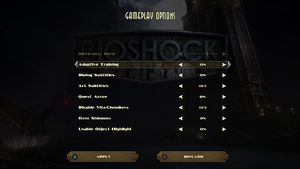 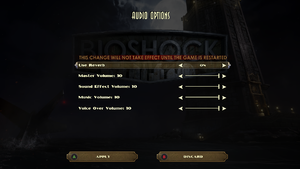 The game, after being patched, now supports in-game options for Mono, Stereo, Quad, Surround, 5.1, 7.1. There is no in-game option for Dolby Pro Logic support.

Surround sound requires your output device to be set to 48 kHz, otherwise most audio will not play.

All reverb has been removed from the game, including the software openAL EFX based reverb (for those without EAX hardware support). In standard openAL, the games would use EAX hardware support if a supported soundcard was detected and fallback to software EFX implementation of these effects if not. The reverb setting in the audio menu does nothing anymore because of this. Even if you set bEAXEnabled=True and UseEAX=True Use3DSound=True in Bioshock.ini, it will not do anything as OpenAL appears to have been gutted from the game and only FMOD is used (the original game appeared to use a combination of FMOD the bulk of the sound engine and openAL for the EAX effects).

The overall audio quality has been downgraded due to poor sound balance, lack of EAX support and proper reverb settings. Actual bitrate of audio files is much higher, but not for BIK video audio tracks, which were severely compressed.

How to keep proper weapon order in Neptune's Bounty[edit]

Some custom control binds can cause the game to crash at specific points (such as during the tutorial section or after obtaining a new weapon) and appear to be caused by control hints shown on the screen. Mouse buttons 4 and 5 (and likely any additional extra mouse buttons) are known to cause this problem.

If you have core dumps enabled and the game crashed once, it won't start anymore.

A GUI Mod for BioShock: Remastered[edit]

This mod changes, restores, and fixes some of the mispositioned graphics in the graphic user interface. Download here.
Works with the GOG version.
Currently updated to work on both Steam & Epic Games Version.

Allows to change settings that are not normally adjustable from the options menu (i.e. custom resolution). Point the program at the game's configuration file location.
May increase the frequency and likelihood of crashes on some machines.
Allows access to ForceGlobalLighting, a setting left over from the original 2007 release that will cause the game to freeze in specific places if enabled. This is verifiable by examining the logs that can be found in the %APPDATA%\BioshockHD\Bioshock\ShaderErrors folder after at least one such crash occurs.

A 64-bit operating system is required.
Mobile chipsets and integrated/AGP graphics cards may be incompatible.