Difference between revisions of "Need for Speed: Carbon"

Need for Speed: Carbon is a singleplayer and multiplayer first-person and third-person racing game in the Need for Speed series.

The PC port of this game is based on the Xbox 360 version, in which some post-processing effects such as the blur effect applied on the street lights as seen on the PS3 version is missing. The motion blur effect also resembles the Xbox 360 version, rather than the more subtle rendition seen on PS3. The quality of the live action/pre-rendered cutscenes are also worse than the 7th-gen console release counterparts.[citation needed].

Physical Collectors copies were used to activate on Origin, but now they no longer do.[1]

There is a DLC that was only released for the Xbox 360 can be accessed in the PC version by using save file editing (Virus Vinyl Pack can also be unlocked by Extra Options).[2]

This is the only "Need for Speed" title to be released for MacOS X.

Progress/achievements does not carry over to the main game. 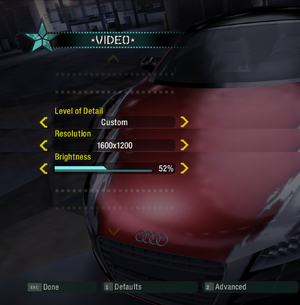 This makes everything in the game smoother, such as the drift force being applied much smoother to the car. 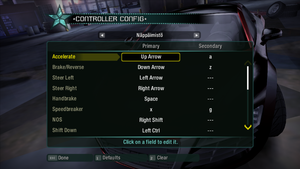 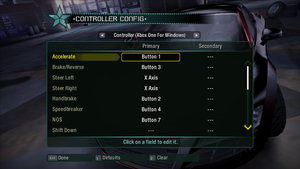 Improves gamepad support by implementing native XInput support into the game.
Reimplements console-like controls with replacing zoom in/out function to its Xbox 360 counterpart and fixing its behaviour in Photo Mode
Xbox and PlayStation prompts are both supported.
Rebinding can be made only through .ini file. It's disabled in game menu, as for now it crashes the game.
Controls are reset to default. 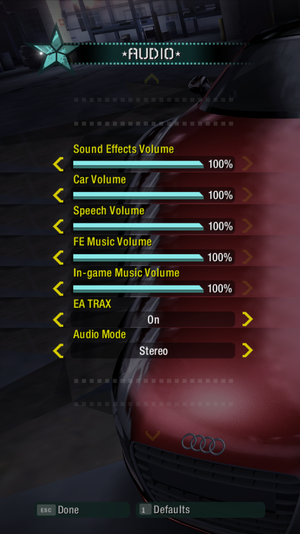 Though the game does not use EAX, Creative Alchemy still can be used to enhance sound quality. It will just emulate DirectSound and 3D positional audio with OpenAL. Difference can be easily noticeable when music is off. For non-Creative cards users see here or use dsoal. Run in Windows XP SP3 compatibility mode to avoid crashing career mode while using Alchemy/DSOAL (alternatively as admin, or use 13AG widescreen which will most likely fix the issue). Sometimes whole career need to be started from the beginning with compatibility mode and Alchemy enabled. The solutions are to avoid disappearing car in career menu and crash after attempt to race. Alternative fix for the issue can be found here. Compatibility mode can cause resetting of the game settings. Please note that attempt of changing details in the game (renderer reset after returning from video settings), and either alt tabbing, have an influence on audio quality, also giving diffreent results depending on g_AudioMode setting to 0, 1 (default) or 2 [8] in registry. Consider also setting 24 or 32 bit 192 kHz in Control Panel>Sound>[Default Device]>Advanced. 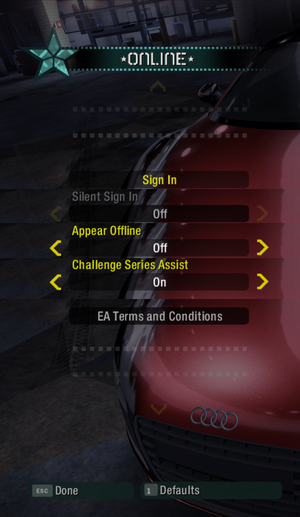 Unable to load save game

Game does not save the graphics options

eauninstall.exe error: "The program can't start because EAInstall.dll is missing from your computer. Try reinstalling the program to fix this problem."

Bumps up quality of the UI and includes 60 fps barrier animations and Need for Speed 2015 styled map (optional), use HUD Resizer for resizing if needed.

Replaces the original SD quality live action/pre-rendered cutscenes with QHD 1440p resolution videos, upscaled from the Xbox 360 version of the game.
Also looks great on FHD 1080p and UHD 4k displays.
Video freezes can occur on modern systems due to the old nature of the game (this is also the case with the original SD quality videos).
Make sure you installed ThirteenAG's Fix and set FMVWidescreenMode = 2, otherwise all videos will be vertically stretched.

Script mod which fixes some issues and makes some improvements for add-on cars.

Enables an unused graphics option and other tweaks.[13]

This mod ports Visual Treatment filters and Sky Shaders from World to Carbon.

This mod makes the game play licensed tracks instead of crew OST during races.

This mod provides full control over the CG fog settings.