The game is free to download on GOG.com and Steam.[3]

Uniquely, the shareware version of the game used MIDI tracks instead of CD Redbook audio in order to keep the download size small.
The European release of Shadow Warrior had the shurikens (throwing stars) replaced with darts due to their heavy usage in organized crime and gang activity at the time. As the ban on said content was later nulled, a patch to uncensor the game was later released. All digital releases are uncensored.
There is a patch for the uncensored release that re-censores it here. A batch file is used for toggling it on and off. For the GOG release, it is required to edit the bat files or the autoexec section of dosbox_swarrior_single.conf to apply it to Twin Dragon as well.

Available for free, published by Devolver Digital. It comes packaged with DOSBox, the base game and the two expansions: Twin Dragon and Wanton Destruction.

Bundled with the "3D Realms Anthology Pack", published by 3D Realms (not available to purchase anymore). It came pre-packaged with the base game, the DOSBox emulator and the two available source ports: SWP (chosen by default on the Steam launcher) and JFSW.

Modern version of the game with remastered visuals and a remix of the main theme, published by Devolver Digital. Besides the remastered version (OpenGL), it also includes the base game and the two expansion pre-packaged with DOSBox.

A four-level shareware episode is available in the downloads section of this page.

A third addon named Deadly Kiss, developed by Simply Silly Software was never released. However a restoration project is in the works.

bMouse will cause the vertical aiming to be inverted. To fix this, go to the Setup Advanced Control Options from Control Setup, then at Advanced Mouse Setup change the Mouse Y Scale to negative number.

DOS/32A is a more advanced extender and open source replacement to DOS4GW. It can improve both performance and stability of Shadow Warrior. 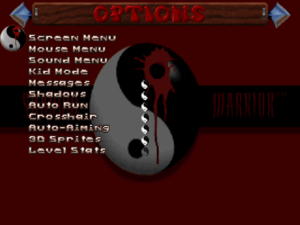 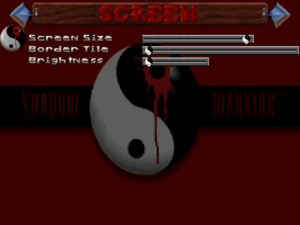 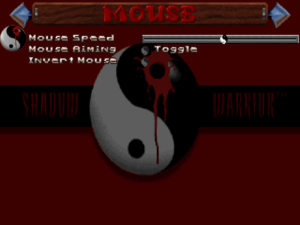 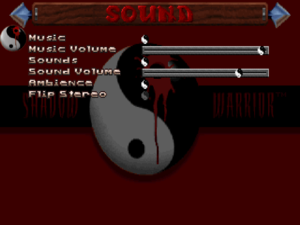 Twin Dragon normally overwrites the original second episode. GOG.com worked around this issue by making a duplicate installation dedicated to Twin Dragon. However, settings changes made to the base game do not carry over the the addon automatically.

Both vanilla and Wanton Destruction executables refresh new copies of themselves with each run (Twin Dragon is unaffected by this issue). This imitates the functionality of the Wanton.exe utility included with the DLC but unfortunately causes an issue with using DOS32A's binding method as any modification to the executables will be reverted on the next run.

Because of financial issues, developer decided to ship Twin Dragon without its music track.[8] Unfortunately, they also disabled the music completely in the process.

Adds high resolution textures and 3D models. Instructions to download it here (point the SVN client to http://svn.eduke32.com/sw_hrp/).
Alternatively, an old pack from ProAsm is available here.
Only works on source ports.

All downloads for the game can be found on the official game site.