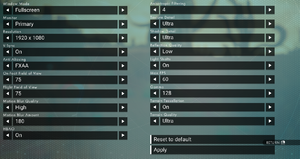 Some resolutions cause game to not render some text[edit]

1360 x 768 makes module upgrade stats disappear. Also line overflowing is broken in some inventory views and in Catalogue. Badly overflowing entries are invisible but still accessible and with working tooltips in next column or line, in case of Catalogue under scroll controls.[citation needed]
10 pixel less horizontal custom resolution made by GPU specific controls corrects the problem with little loss of resolution.

Long pauses/freezing during starfield intro and during gameplay[edit]

Many mods can be found at Video Game Mods, Zettamod's No Man's Sky and Nexus Mods.
Mods almost always need to be updated by their creator after a major game update (Atlas Rises, NEXT, Beyond, etc.).