This page is for the original game. For the updated version, see Grim Fandango Remastered.

Although not completely glitch-free, ResidualVM fixes lots of other bugs.[1]

Demos are available from ScummVM.

The latest official patch 1.01 fixes several crashing bugs, as well as a possible issue where a certain puzzle would be unsolvable on faster machines, and also adds subtitles to cutscenes. It is available here and at soggi.org.
Cannot be installed on 64-bit machines. Bgbennyboy's unofficial launcher should automatically circumvent the problem
Grim Fandango Patch - ScummVM instructions

This unofficial launcher is designed to be used in lieu of the game's built-in launcher (GRIM.EXE). Though it is not necessarily required (unless you are on a 64-bit machine), it does provide easy access to many hidden or undocumented features of the game, including the ability to run the game from the hard drive without inserting the discs, the ability to run the game in a window, the option to automatically load the last saved game, and several debug keys.

If you used bgbennyboy's unofficial installer, the launcher should be installed automatically. Otherwise, download it, and extract it to your Grim Fandango install folder. Then, launch the game using Grim Fandango Launcher.EXE.

Alternatively, you can copy the entire contents of both discs to a folder on your hard drive (skip any duplicate files). Then, enable developer mode (see the section below) and launch the game using GrimFandango.EXE. Note that if you do this, bgbennyboy's unofficial launcher may not function; running GrimFandango.EXE at least once may or may not resolve this. Also note that the aforementioned launcher is currently the only way to install the official 1.01 patch on 64-bit systems.

Yet another alternative is ResidualVM, a spin-off of the ScummVM project. Like ScummVM, it allows you to copy the game's contents into a folder and run the game via the program's launcher. To note, the team is still working out some kinks, since this is a custom and unofficial interpreter of the game's engine, so consider it a work-in-progress. With version 0.1.1, however, they have also managed to fix 14 bugs that were in the released version of the game back in 1998. Install simply requires the ResidualVM install and the necessary files from the game (detailed here) copied to any folder. Note that you do not run the installer of the patch, but rather place the patch executable into the folder. As of 2019, this is the only way to play the original release of the game on non-Windows operating systems.

You can load or save your game by pressing F1 to access the menu.
Running GrimFandango.EXE with the -s command-line parameter will automatically load the most recent saved game (the unofficial launcher includes this as an option). 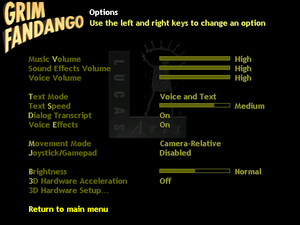 "Grim Fandango is already up to date" error[edit]

Allows several hidden features, such as the ability to run the game from the hard drive and/or in windowed mode.

Running the game without the discs[edit]

Enabling developer mode allows the game to be run without the discs inserted.

If you installed the game using the official installer, but are not using bgbennyboy's unofficial launcher, you will need to copy the entire contents of both discs to your Grim Fandango installation folder (skip any duplicate files). Then, enable developer mode and launch the game using GrimFandango.EXE.