Use SystemPack to remove the 25 FPS cap, fix compatibility issues, and improve resolution support.
Steam overlay doesn't work with this game. Use Union to fix the issue.

You can download an English demo and a German demo from World of Gothic. You might have to copy the download link on the page into your browser.

The latest retail patch is version 1.08k. Some digital distribution versions already include this patch. To check your current patch version look at the bottom right of the main menu box.

It is advised to use Union over the above SystemPack as the latter is no longer developed.
Already contains the above Player-Kit in its installation (Union Primary Universal Patch).

It is recommended to use this patch in combination with Union.

In the original German version of the game, the NPC Velaya bathes in Gomez's room completely naked at certain times of day. Subsequent releases gave her a bikini. To restore her original behavior, simply rename or remove the textures_bikini.VDF file in <path-to-game>\Data.

The original German release included a performance by In Extremo; this was omitted from later German releases and all international versions.
Changes the names of some enemies to bizarre names. 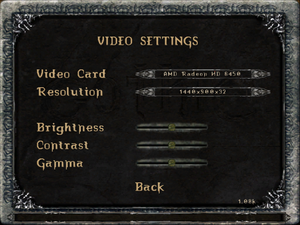 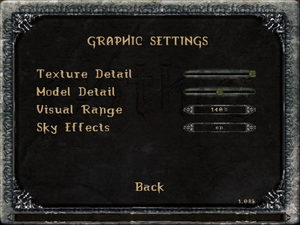 Task-switching may cause repeated Tab input when you return to the game (simply press Tab again to make it work normally).
Task-switching during video cutscenes will crash the game (there are only four during the game, not counting the intro and ending). 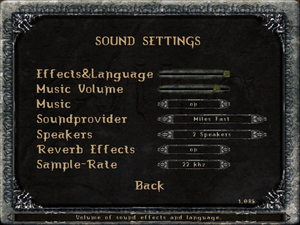 This is caused by forcing anti-aliasing. Either method below will fix this.

This can be caused by deleting the saves folder.

A gate in the final area won't open when playing with the Player-Kit due to the cutscene not playing.
Use SystemPack.

Game Starts, but screen is black[edit]

If you have multiple monitors, disable/unplug all of them except the one that you're using to play Gothic.