A demo and an add-on of Deus Ex are available at GameFront, including the first two missions.

The 1.112fm patch fixes various bugs and adds multiplayer.
Digital distribution versions already include this patch as do some retail re-releases.
This patch unintentionally removes music from the Hell's Kitchen map on your last visit, as well as introducing other map bugs. The problem is present in all GOTY releases. Except for one you manually patched yourself, which will also be missing the new conversation files. Note that though the GOTY version introduces noticeable bugs, it also fixes many. An in depth file comparison along with relevant links are available here.

Fixes typos, logic errors, and other issues in the conversation files.
Only available in English, Russian, and Turkish. All available in the Community Update. (Russian Confix currently only available there.)

This fix will replace the existing deusex.exe file within the folder. If you want to be able to uninstall it, backup the main executable beforehand.
Can be used with the Steam release as it'll bypass Steam DRM, letting you play Deus Ex without Steam.
Does not work with the GameStop (Impulse) version of Deus Ex. Instead use the Custom launcher combined with the OTP UI Fix or Peixoto's patch.
FPS limiter in new versions of DeusExe causes freezes when opening menus. See Game freezes when opening menus.[2]
Using AutoFOV while running the game windowed and minimized, will result in an instant crash.

The patch includes every translation, patch, alternate exe, and renderer known; As well as many useful tools for players and modders.
Mods integrated include Deus Ex Transcended (with the option of the Deus Ex Map Patch), Confix, Deus Ex Unofficial Patch v2 & Deus EXE. See mod page for complete list.
Also includes the original demo files which you can apply the multiplayer patch to. This lets you play the full multiplayer and single-player up to the end of mission 2! Minor updates to some of the included projects have been done and more is planned.

Also known as Unreal Direct3D 10 renderer.
This renderer may exhibit stuttering and performance issues with Nvidia driver 442 or newer.[3][4]

Made as a fork of Kentie's Direct3D 10 renderer.
Also known as Unreal DirectX11 Renderer.
The latest version does not support Deus Ex—support will be reincluded in the next release.[6] For now, use v1.6.1.
Places a temporary watermark in the bottom right, and copies the developers PayPal link to your clipboard. Follow these instructions to disable the watermark and remove the PayPal link from being inserted into your clipboard.

These can be used as an alternative to Kentie's Direct3D 10 renderer, providing bug fixes and improving compatibility without adding more features. 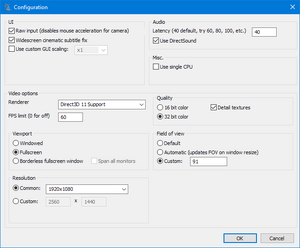 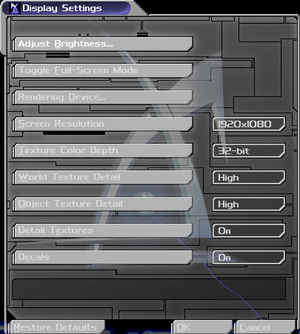 Available for free completely to everyone and anyone who owns the original game through Steam or GOG.com.
Upgraded levels, new art and soundtrack. Also adds many quality-of-life features.
Added NG+ (skills, augmentations, and equipment carried over) option to replay the game on a second playthrough or more.
Maps even after changing them in the settings to vanilla are still changed/edited making this mod less viable for vanilla experience.

Compatible with Kentie's Custom Launcher.
An additional renderer is required. Two are included in the New Vision download, one for DirectX and one for OpenGL, and a video demonstrating full installation of the mod with Kentie's Launcher can be found here.
Versions 1.5 and 2.0a are vastly different. 1.5 retextures most of the textures, while 2.0a upscales the original ones.

New female JC Denton character model.
All of JC Denton's voice lines faithfully re-recorded.
NPCs lines edited to accommodate female pronouns and new tertiary unobstructive NPCs added.
Select NPCs were recast due to problematic audio editing, all except for one were done mimicking the original voice as closely as possible, according to the mod creator.

Compilation of mods and fan-made missions can be found here. The wiki page also contains detailed descriptions of many mods.