The original edition of Crysis 2 on Steam carries TAGES Solidshield DRM with a 5 machine limit, while the Maximum Edition contains SteamStub DRM in addition to SolidShield, although the SolidShield wrapping seems inert.[citation needed]

How to change the in-game language[edit]

Crysis 2 auto-detects your Operating System's language and uses it without asking.

Patch 1.9 prepares Crysis 2 for DX11 features and high-resolution textures. Each need to be downloaded and installed separately from the 1.9 patch. They are both included in the Maximum Edition.

Patch 1.9 can be downloaded from here.

The DirectX 11 Ultra Upgrade can be downloaded here.
Included in Maximum Edition.

With this package the following DX11 exclusive features will be activated:

The High-Res Texture Pack can be downloaded here.
Included in Maximum Edition.

The High-Resolution Texture Pack doubles the fidelity of many of the game's art assets.

Crysis 2 is very memory intensive. This app improves performance for Crysis 2 on 64-bit Windows systems with more than 2GB RAM by allowing it to access up to 4GB RAM.

A step by step list of instructions for BlackFire's mod is available at the mod file's description on ModDB.

Most of the download links for the MaLDo HD mod on the original blog page are dead. The files can be found elsewhere though, e.g. over at Mod DB and over at gamepressure. 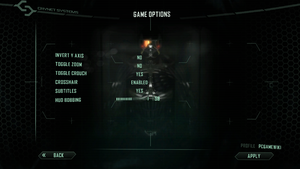 Every automatic checkpoint save made in the game is saved as a permanent save file. There is no way to delete these files in-game, nor are they ever overwritten on subsequent playthroughs. These files can add up to several hundred megabytes worth of permanent save files if playing through the single-player campaign more than once. 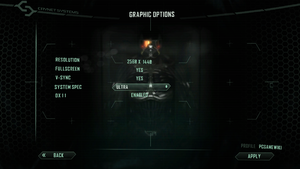 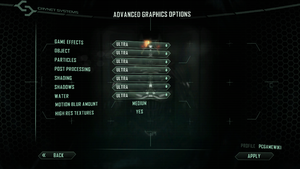 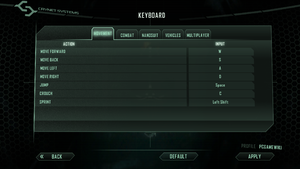 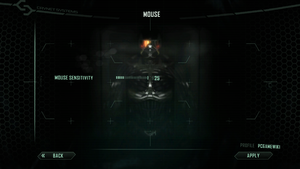 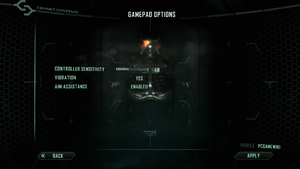 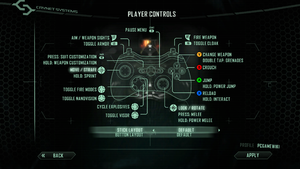 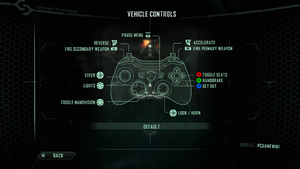 There are a number of advanced control options that are not taught in the game's tutorial.[3] These include:

Hold the sprint button (default ⇧ Shift) while aiming down sights to stabilize your aim (costs suit energy).[4][3]
Activating armor mode (default Q) while aiming with a gun allows you to zoom in further.
Hold the melee button (default V) for a stronger melee attack (that uses up all suit energy).[4]
You can also use normal and heavy melee attacks while gliding (sprint + crouch), which leads to a kick.
De-cloak just before firing a weapon, because firing from stealth would drain your energy. 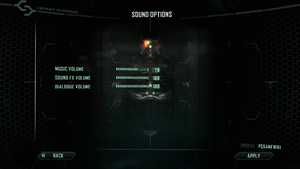 The statistic-screen in the menu displays that 13 weapon-attachments are findable in single-player but in fact there are only 12. Therefore, it is not possible to achieve "100%".

When aiming down sights with assault scope mounted on any weapon, the sensitivity will be a lot higher than the one set in the game settings.

When playing Crysis 2 on an Nvidia card, there can be extreme and unexpected lag in the single-player or multiplayer campaign. This is very noticeable while navigating the menu, something that should be instantaneous and direct. If you experience this lag, try switching to windowed mode (Alt+↵ Enter). If this lag now disappears and gameplay is suddenly fast again, the solution is this:

Crash to desktop at startup[edit]

The game may freeze up and crash to the desktop without any errors.

The game may set your monitor's refresh rate to its lowest supported refresh rate when in fullscreen mode, resulting in a lowered FPS when Vsync is on, and heavy screen tearing and/or stuttering even if FPS is high. This issue is separate from the issue capping the frame rate (see The game is capped at 64 FPS), which may also need to be addressed.[8]

The game will close shortly after starting, and Windows Defender / Microsoft Security Essentials will report to have blocked activity of "VirTool:Win32/CeeInject.gen!FG" malware. However, this is a false positive.

Crash to desktop when using MSI Afterburner's On Screen Display[edit]

Frame rate capped at 100 or 64 FPS, even with V-Sync disabled[edit]

Updates to Windows 10 have resulted in incompatibility with older CryEngine games, which may result in a capped frame rate. Windows 7 is also affected, but only in menus (eg. pause menu). Enabling NULL appears to have no effect under Windows 7.[13]