As the multiplayer service GameSpy has terminated its services, the game requires either a community-created Master Server Patches or the use of the third-party software GameRanger to enable online functionality.

The game is not sold digitally due to various legal issues with several parties.
Free singleplayer and multiplayer demos are available.

Gold Edition released in May 2003 bundles the base game with the Primal Hunt expansion pack.

Make sure the game is patched to v1.0.9.6 before installing the updates

Contrary to the name, this is an unofficial patch that not only redirects the multiplayer segment of the base game and Primal Hunt to a community-run master server, but also introduces fixes for modern systems.
Requires the official 1.0.9.6 patch and Single Player Map Update #1.
Includes widescreen and high resolution support, anisotropic filtering in the custom performance menu, a mouse input fix, and framerate issue fixes.
Includes a console with commands for turning off visor color inversion, showing the framerate, toggling patch options, etc.
Incompatible with custom launchers.

Intro videos can be skipped by clicking on Options in the launcher and ticking Disable Logos. 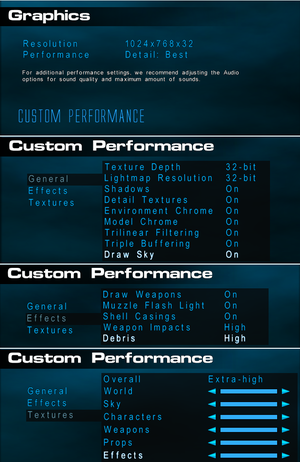 The game does not launch or crashes when loading a level

With recent graphics drivers, the game's color inversion does not work, resulting in the Alien vision and the Predator tech visor displaying black screens.[4][5]

Can also be installed to <path-to-game> and launched with the -rez visionfix.rez command line argument.
Changes the look of the inverted vision modes significantly.
Only works in singleplayer.
Predator's night vision does not work underwater.

Check the Windows Event Log for the application error - if it refers to a \system32\HID.DLL then it's likely an error with some input devices.[citation needed]

Replaces most textures in the game with higher resolution ones.
The mod drastically changes the game's overall aesthetic, aiming for a grittier, more desaturated look.