From PCGamingWiki, the wiki about fixing PC games
This page is a stub: it lacks content and/or basic article components. You can help to expand this page by adding an image or additional information.
This page may require cleanup to meet basic quality standards. You can help by modifying the article. The discussion page may contain useful suggestions.

Released as Star Wars Supremacy in some regions.
Needs a workaround for modern systems; see Installing on modern versions of Windows.

1.01 Update updates the game to the latest version. 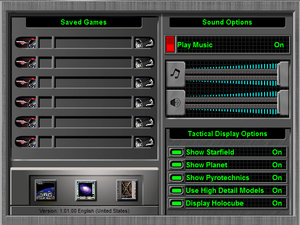 When selecting a planet as a target for a mission or construction, the hit area is now smaller and off-center. The best place to try to click is below the planet and to the right, where a large system energy bar would end.

Installing on modern versions of Windows[edit]

Icons and sprites are upside down, also colors are slightly wrong[edit]

Problem: When the game opens up a new window to let you select a mission, select a build option, training option, etc., the popup is shifted based on the coordinates of the game window. So, if your game window is in the upper left corner of the screen, then the popup appears. If your window is too far down or right, the popup appears outside of the window bounds and you can't see it.

Choosing to maximize the window at least puts the graphics in the center of your monitor, which might be preferable to the upper left corner.

When starting a new game, the droid talks through a very long introduction. In Windows XP and below, you could skip this by pressing some button, but that no longer works in Vista and above.

This will still go through the briefing, but all the spoken dialog will be skipped, so it only takes about 2 seconds.