Star Wars: Shadows of the Empire

From PCGamingWiki, the wiki about fixing PC games
This page may require cleanup to meet basic quality standards. The specific problem is: the information in the VOGONS thread needs to be ported here. You can help by modifying the article. The discussion page may contain useful suggestions.

Modern systems need workarounds for some compatibility problems; see installing on modern versions of Windows.
Playing with a joystick is recommended.
Physics start breaking at high framerates. A 30 FPS cap is recommended.

The latest official patch 1.1 enhances performance and provides support for more graphics cards. It is available at www.patches-scrolls.de and soggi.org.

Path can be selected in the launcher. 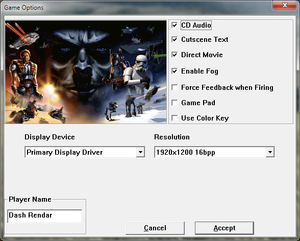 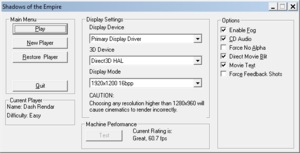 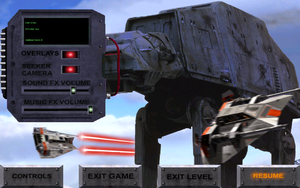 Installing on modern versions of Windows[edit]

The background music will not play on Windows Vista and later. The game reads the audio from the CD in audio-CD format in some fashion that is incompatible with more recent versions of Windows.