SafeDisc retail DRM no longer functions properly on Windows Vista and later (see above for affected versions).
A preconfigured Wine wrapper for Linux is available for the GOG.com release.

A massive community patch that adds a variety of enhancements and stability improvements to the game. They include:

Further patch details, download links, and support can be found on the official Steam Community page.

player.nfx is for the base game while player.nf1 is for the Clone Campaigns expansion. 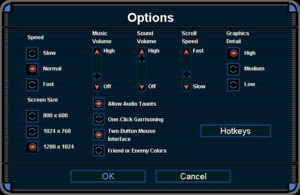 A No-CD executable is required for this.[3] Note that the GOG.com version already ships a decrypted binary and does not require such.
This fix is already included with the Star Wars: Galactic Battlegrounds All-In-One Patch and Expanding Fronts. 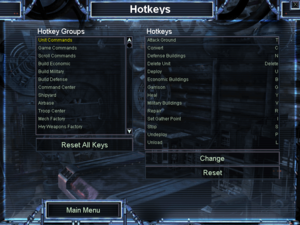 Adds 2 new factions (Geonosisians and Zann Consortium), expanded vanilla factions, a handful of custom map randomizers, and an expanded map editor.
Uses a separate executable from vanilla (battlegrounds_x2.exe). This means it doesn't interfere with a vanilla installation, however, it needs to be renamed to launch with Steam/Galaxy or use online multiplayer restoration tools.
Includes native widescreen support, and a windowed mode option through an external configuration tool.
The aforementioned configuration tool can also speed up animations to 60fps, as well as other experimental features such as large map support and larger fonts for some text.
Windows only.
Configuration data for Expanding fronts is stored in <path-to-game>\Game\player.nf1 and HKEY_CURRENT_USER\Software\LucasArts Entertainment Company LLC\Star Wars Galactic Battlegrounds: Expanding Fronts\1.0. Changes made in the external configurator are stored in HKEY_CURRENT_USER\Software\LucasArts Entertainment Company LLC\Star Wars Galactic Battlegrounds: Expanding Fronts\Configurator.
A higher resolution icon for this mod can be found here (choose battlegrounds_x2.ico).