The Steam version validates the SteamID64 of the user against the ID embedded in the save files, and hides saves that does not match. Use SteamID64 Editor to transfer saves between users. As a result of this, playing the game through separate Steam accounts on a shared account in Windows can cause saves to be overwritten. See the unresolved issue section for more information. 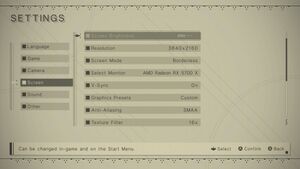 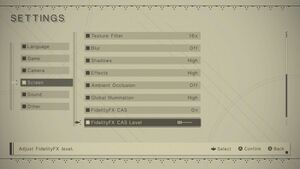 Improves keyboard and mouse controls for the Steam version of the game.
Forum thread

Occasionally the game causes a display driver crash/reset which it can not recover properly from.[15]
Official fix for affected users is to update their display drivers; AMD users should at least use v17.5.2[16] and Nvidia GeForce GTX 780 and 780 Ti users v384.94,[17] although some users might still experience the issue.[18]
The game continues playing in the background so if you're in a save zone you can quick save your progress by clicking on Esc+↵ Enter+↵ Enter. You should hear a chime sound effect when the game have been saved successfully.
Terminate the game using either Alt+F4 or Alt+Tab ↹ followed by terminating it through the Task Manager in Windows.
Users can mitigate the issue in various ways. An aggregated list of what might work can be found in this guide.

The game crashes once you die for the 21st time during the Shoot 'em Up level of ending E.[23]
The issue was introduced in the PC patch released on 2017-04-28.
This can technically be worked around by downgrading the game to an earlier version, however it is generally not recommended to do so. Refer to the Downgrade NieR:Automata chapter of this guide for details.

The debug menu requires a controller to be opened and navigated since Evade does not have a dedicated keybinding for keyboards.[25]

After the July 15 update, the engine scenes are running at 60 FPS (while previously running at 30 FPS), which causes the hair to behave strangely.[26]

The Automata-LodMod fixes LOD pop-in and ambient occlusion appearing through walls, along with various other graphical improvements.

Special K (also known as FAR) can override the global illumination below that of the game's own setting, granting noticeable performance improvements on lower-end devices. On top of this the mod can also replace the FPS limiter of the game with a better one that can eliminate micro stuttering on some systems.[27]
See the Special K wiki for instructions.

Enabling MSAA can cause certain artifacts to appear around distant foliage, along with black-dot issues in shadows.
nVidia users can fix this by using nVidia Control Panel - change "Antialiasing Mode" to "Enhance the application setting", and "Antialiasing - Transparency" to "2x (supersample)"[28]

The mechanics in the hacking sequences (e.g. when fighting the Broken Machine) are tied to the frame rate; if it drops low enough, it'll mess with the physics and cause crashes.

2B Hook is a mod menu containing multiple features in a single package.
Includes many features such as god mode, buddy/item/pod spawning, rainbow hair, protagonist switching, a duplicate buddy as an NPC, a FPS unlocker, and more. A full list of features can be viewed from the mod page.