Diablo is a singleplayer and multiplayer bird's-eye view and isometric ARPG game in the Diablo series.

Later versions of the Diablo Battle Chest starting in 2007 no longer include the original Diablo.
A demo is available.

The GOG.com version includes the base game and the non-canonical Hellfire expansion. It features two builds: the first one is the classic version without DRM and with access to the Battle.net server, and the other one is the enhanced version with GOG's custom DirectX wrapper with additional features, but without Battle.net access. It also comes bundled with IPXWrapper, which both versions can use.

The GOG version is already patched.
Battle.net's support section has the latest patches; spawn versions of the game require separate patches from the full versions. Battle.net will not connect without the latest patch. 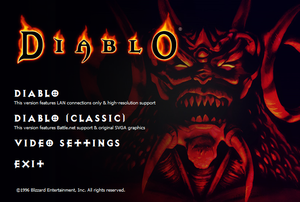 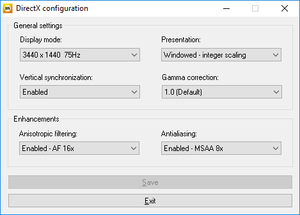 Only up to 2 players are supported via modem.

Already included in the GOG version.
This tool provides a workaround the obsolete IPX protocol used in multiplayer. Extract it to <path-to-game>.[3][4]

Music doesn't play on the character and multiplayer selection screens[edit]

The official patches introduced a behavior where music no longer plays on the character or multiplayer selection screens.

Later physical disks come pre-patched with later versions which have this issue.

Game crashes when switching to another process[edit]

The game crashes when switching to another process on modern Windows, typically done using Alt+Tab ↹ or through the lock screen using Ctrl+Alt+Delete.

The game can lock up with a black screen when returning to the main menu from the multiplayer menu on modern Windows.

When entering a character name on modern Windows other text around the text entry area that should be cleared remains and appears partially cut off.

When quitting the game the Diablo.exe process can remain indefinitely on modern Windows.

Title screen effects such as the fire sometimes partially disappear on modern Windows.

Rainbow or washed out colors on Windows[edit]

Colors can appear washed out, appear as a rainbow, or simply white due to a DirectDraw compatibility issue in Windows XP, Vista, and 7, including running in compatibility mode for these versions.

The game can crash periodically with modern Windows, especially due to modern GPU drivers.

After entering a character name in multiplayer you can get an error due to Windows compatibility issues.

You must be running the latest version and not have the Hellfire expansion installed.

Information on running this game on Linux can be found on the GOG.com forums.

A FOSS reimplementation of the Diablo engine currently in an alpha state; see the site for details.

Normally on left mouse button down it only attacks once even if held down. Later games in the Diablo series provide this capability.

An unofficial single-player mod with a host of features including increased resolution and updated compatibility with modern Windows. Copy the contents to the Diablo folder and open Belzebub.exe to play.
Allows running at up to 60 FPS, in windowed mode, in resolutions scaled up to 1024p and various non-scaled, fixes crashing and DirectDraw compatibility issues, multi-monitor compatibility, and continuous attacking with the left mouse button held down.
Can't play the vanilla game without the added content, multi-player isn't currently available, and the viewing area is simply increased; sprites remain small at higher resolutions.

Another unofficial mod that also requires the Hellfire expansion.