Call of Duty 2 is a singleplayer and multiplayer first-person action, FPS and shooter game in the Call of Duty series.

SafeDisc retail DRM does not work on Windows Vista and later (see above for affected versions).
Demo
The North American retail edition has 6 CD-ROMs to install, while the European retail edition and all special editions are just a single DVD-ROM.

There are 3 ways to insert commands. 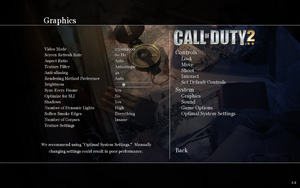 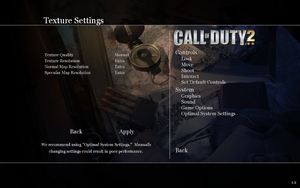 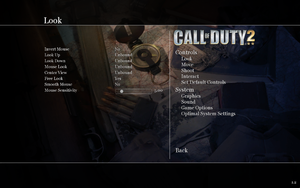 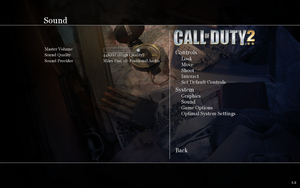 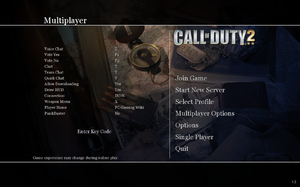 The fix is to force the CoD2 exe file to only use one processor core, but that doesn't mean the problem is exclusive to multicore processors; the same thing happens even on a Pentium 4 with Hyperthreading. Note that opening the Task Manager after starting the game and setting the process CPU affinity from there does not work. We have to get a little more involved than that. One last thing: the following directions are for the singleplayer exe file. If you find you need to apply this fix to multiplayer as well simply repeat the steps for CoD2MP_s.exe.

Getting automatically kicked from servers[edit]

On some systems the game won't start on Windows Vista, 7 or higher.

Because running in compatibility-settings gives DirectX some unnecessary flags, in-game-fps can be highly reduced on some systems.

In the graphics option menu, set the "Rendering Method Preference" to DirectX 9.

If the game crashes when trying to change the renderer, either modify the game's configuration file manually with a text editor or apply compatibility settings (see Game won't start on Windows Vista and 7 for details).

Another workaround is to start a new game and then change graphics settings from there.