With Windows Vista to 10, the game may fail to autosave, overwrite past saved games, and fail to save related world events, if it is not Run as Administrator. This can cause dialogues, items and cut-scenes to disappear or be buggy when you load a past saved game. The notes below mention this briefly, but it is essential to know before playing.

The vanilla game suffers from serious bugs, which can prevent you from progressing. This mod fixes those issues, but also rebalances the game and adds additional features. It can be downloaded here.

The game files include a game manual named manual.pdf. It is highly recommended to check the key and mouse commands described in this manual before playing, as there isn't a tutorial in-game.
It can be freely obtained from the Steam store. 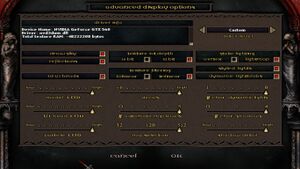 On newer systems (x64 Systems or 64bit) the autorun install from disc wont work because of an executable error. You can still install the game from disc using the installer found on the disc in the setup folder.