SafeDisc retail DRM does not work on Windows Vista and later (see above for affected versions).
A demo pre-patched with NewDark is available.

NewDark is an fan-developed update patch to the Dark Engine that gets Thief II: The Metal Age to run on modern systems.

T2Fix is an "upgrade" patch that updates the game with NewDark, which improves compatibility on modern systems.

Features many mission fixes and optional texture mods.
The GOG release has an out-of-date, lite version of this patch. It's recommended that you update the T2Fix Lite, which does not have texture mods and mission fixes or install T2Fix.
Unlike the GOG release, the Steam release does not use T2Fix.
Restart the current mission (or progress to the next one) after patch installation. Otherwise you may encounter various issues, such as torches that don't properly go out when extinguished. 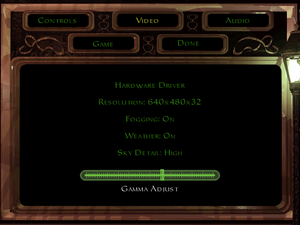 Installing T2Fix enables Vsync by default. Vsync can be disabled. 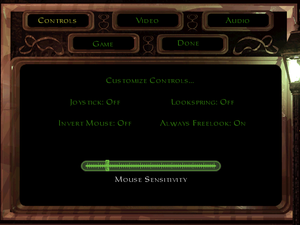 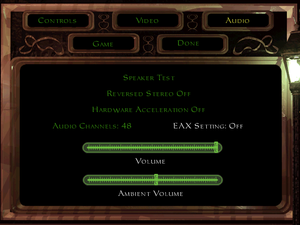 Videos do not play

Gamma slider has no effect on gamma/brightness

By default, Thief II: The Metal Age has view bob that may cause motion sickness.

Standalone FM loader where you can manage, install, and play all of your FMs in one place.
Supports Thief 1, Thief 2, Thief: Deadly Shadows and System Shock 2.
Well maintained and open source.

A large number of Fan Missions, many of very high quality, have been produced for the Thief games.

A categorised list is available here.
A pre-patched version of Thief2X, the fan-made expansion pack for Thief 2, can be downloaded here (choose the 'ZIP-archive' link).

Enhancement Pack 2.0
An updated version of the original Enhancement Pack (which is included in T2Fix and is much less comprehensive). This contains higher quality reproductions of many but not all original textures and objects. Also works with Thief Gold/The Dark Project.

The Necro Age
Very similar to the Enhancement Pack 2, but focuses on giving the game a slightly darker, noir look. Somewhere between the EP2 and HD Mod in lore-accuracy. Also works with Thief Gold/The Dark Project.

Thief 2 HQ Paintings Pack
Standalone addition to the ESRGAN mod for Thief Gold and Thief II: The Metal Age. All paintings from the game being manually recreated using real life originals from online galleries in HQ 1024x1024 resolution. Could be used with any other modifications.

Filtered Cinematics pack
Video Pack provides filtered cinematics with 15 to 30 fps conversion, compression artifacts removal and deinterlacing some of the original videos. Requires T2Fix to work. It's a part of the Thief 2 ESRGAN Texture Pack, but can be installed standalone.

NewDark's system requirements - and by association those for GOG.com's Windows release - are higher than the original requirements listed here.