SafeDisc retail DRM does not work on Windows Vista and later (see above for affected versions).
All the digital distribution versions are pre-patched with NewDark.
OS X and Linux versions use Wine.
A faithful higher resolution icon for Windows can be downloaded from the Files section.

Essential patcher which integrates the NewDark patch and fixes various issues.
Latest versions automatically disable the intro video for you (if you wish to re-enable it for whatever reason, add always_play_intro to the cam.cfg or cam_ext files).
SS2Tool requires Vista or later due to included Rsync, however NewDark runs on 2000/XP or later. One can patch it on a Vista machine then transfer it to an older machine. Digital versions already include NewDark and compatibility fixes for modern systems however the tool is still necessary for proper mod support.

Modding the Wineskin version can be done by firstly installing the Windows version in a virtual machine, patching it and installing all desired modifications and then replacing the System Shock 2 installation within the Wineskin version with the custom version. If you are using the Steam version it may be necessary to deactivate Steam's "Keep up to date" function for this to work.

cam.cfg contains game settings.
cam_ext.cfg is the configuration file for the game once patched using SS2Tool. 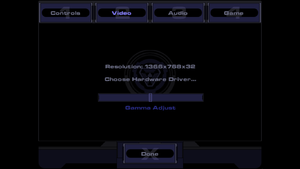 In addition to setting video options, editing cam_ext.cfg will allow you to set the interface/HUD scale and transparency. There are also custom crosshairs available (using them with a mod manager requires changing their extension from .ss2mod to .zip). 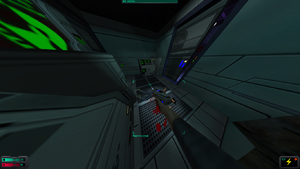 Multiplayer is officially unsupported in NewDark. Even so, a guide for use with NewDark is available here.

Left-clicking or dragging does not work[edit]