Retail version of Spore can't get the March 2017 update, so online functionality doesn't work. GOG.com, Origin, and Steam versions have this update. Contact EA support to activate retail Spore keys on Origin.[4]
Steam version of Spore is not recommended for modding purposes, as it is known to often have troubles with the Spore Modding API.
Avoid having Spore and its DLC's installed from several sources, as this will cause severe issues with savegames and modding.

A limited free version of the creature creator from the game; can only be used to create creatures; does not include any other gameplay.
All creatures created in this utility can be carried over to the full game.
Spore Creature Creator and Spore should not be installed on the same machine at the same time. Existing save games may corrupt and other issues may arise.[citation needed]

Dr. Pepper Bots part pack is notoriously buggy and will cause your game to crash whenever a creature attempts to sing with a bot parts mouth.
Dr. Pepper Bots part has been reported to mess up game installations to the point of being unable to properly reinstall the game after uninstalling. It is strongly discouraged to have this DLC installed.
Galactic Adventures is required to install any mods after the 2017 patch.

Patches can be installed through the launcher or manually
Digital versions of Spore do not require manual installations of any patches. 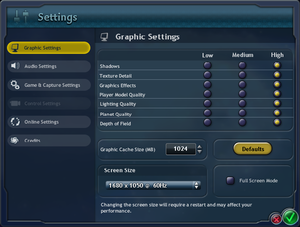 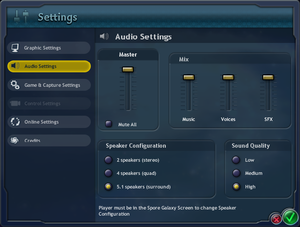 This bug can appear after installing Patch 1.04 or SPORE: Galactic Adventures. The fixes only affects all future names, any previous objects named BAD_DATA must be changed manually.[7]

The Spore ModAPI SDK allows you to create C++ mods for Spore. These mods are compiled into .dll files, that can then be used by the ModAPI Launcher Kit to inject them into Spore.

Many tutorials are available.
Goes hand in hand with other mod development tools.

Blender add-ons that include tools for modding spore.

A collection of mods for Spore.

Contains a wide array of mods, which have been stored for archival purposes.
The modding community heavily discourages installing these mods. Many are likely to not work and may break your game.

The most used community hub for Spore modding. Contains a huge array of mods.