This product is no longer playable in any capacity. It is covered here for historical reference.

The game became unplayable following the shutdown of the online services on March 1, 2016.[1]
An open-source server replacement project, titled Resurrection Capsule, is being developed.

Digital edition of the game distributed by EA. Contains the same unique items as the limited edition along with a unique special hero called Meditron.

All save game data was stored online on Maxis/EA's servers. 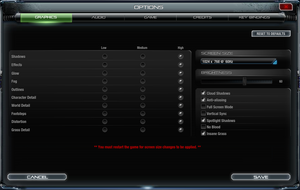 Brightness can only be set while in fullscreen. 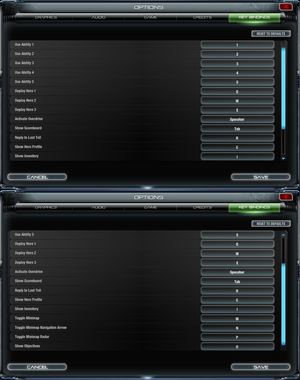 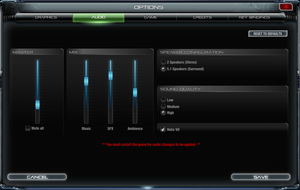 A re-install is required to change localization.

Affected users will find that they can start up Darkspore, but attempting to log into their account will fail, displaying error code 73003.[6]

Attempting to determine the cause

All testing by the community so far leads to the issue being account side on EA/Maxis' end.
In each of the following cases, an account unaffected by Error 73003 was tested and was able to log in.
Known to have no effect:

Possible workaround for players yet to purchase Darkspore

Assuming that Error 73003 can affect players attempting to play the demo, players should download the Demo before purchasing Darkspore and should check that they can play the demo on their account. If they cannot, they should create a new Origin account and attempt to log into Darkspore with that account when playing Darkspore. This process should be repeated until an account is not affected by Error 73003. The player should then purchase Darkspore for this account.

Contacting EA if you are affected

A number of players have talked about how they have contacted an EA Game Advisor complaining about being affected by this error. A lot claim to have received money off of other games and in some cases, full games of similar value when trying to obtain a refund for their purchase. These claims cannot be confirmed however.

Darkspore not available for play. Try again during a scheduled play test

This occurs when Darkspore is installed into a folder that your user account cannot modify.

This occurs when there is something invalid with your account details, likely an invalid date of birth.

Originally, logging into Darkspore with an account that does not have a Darkspore retail key registered to it, would open an in-game web browser displaying a page where you could activate your retail key or cancel. This page is no longer available.

Unable to save hero

The server performs validity checks when saving your heroes and will refuse to save them if it finds a problem not picked up by the client.

A persistent internet connection is required at all times.[7]