This page is for the original release. For the remastered release, see Sniper Elite V2 Remastered. 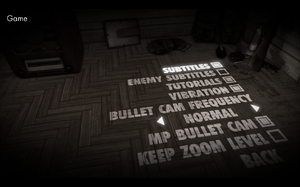 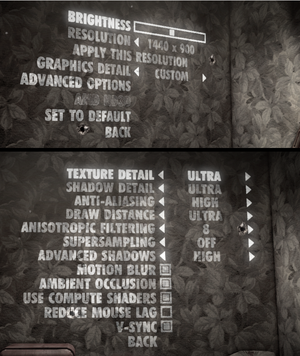 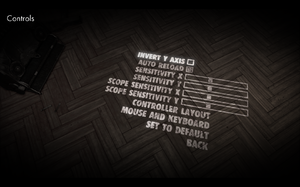 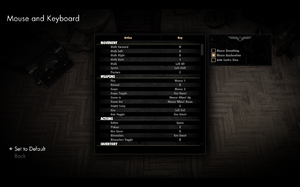 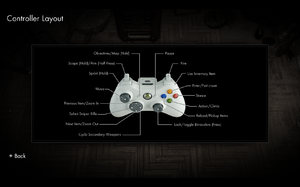 The gamepad layout for the game. 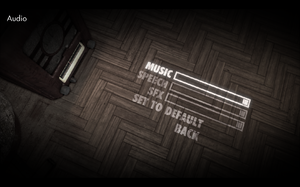 Some users have reported an inability to connect to some or all multiplayer servers.[2] The developers are aware of this issue and the next patch will reportedly fix some of the problems, most notably the fact that connecting to a dedicated server means you are subsequently unable to connect to a P2P server.

Reportedly the game crashes after a kill in some instances.[3]

Sometimes the zoom controls will cause the scope zoom to zoom in and out continuously.[4]

This issue revolves around the inability to use the mouse in the in-game menus as the pointer will not appear, and has been reported by several users.[5] It can be caused by Alt+Tab'ing/minimizing the game, although some users have reported the use of the program Raptr as the cause. If you are running Raptr, try closing it before opening the game again.

Issues can occur with the game's fixed refresh rate when using a monitor with a higher or lower refresh rate.[7] Nvidia card users can fix this issue using a Refresh Rate Patcher which locks the frame rate for all games, and can easily be enabled/disabled.

This appears to be caused by the game process being set to 'low'. This can be set to 'high', but restarting the game will reset this to 'low'.[8]

This can be fixed by disabling the anti-virus program running.[9] In addition, in the game prologue only the binoculars can be used (b key) at first. Zoom in and out with them, check out the buildings etc. as directed on screen. Once the game decides you have operated the binoculars properly, the sniper is allowed to move. At this stage no aiming or firing of a gun is allowed. Follow the on-screen directions up to laying a trip mine. Shortly after the sniper must display ducking for cover and quickly emerging to take out a guard. Once completed the game proper begins!

Frame rate drops when looking through the scope[edit]

If you are experiencing a severe frame rate drop when looking through the scope or binoculars when the game runs fine otherwise, try turning off "compute shaders" and/or supersampling.[10]