This page is for the 2008 reboot. For the original, see Prince of Persia.

The Epilogue DLC is not available for this game on PC; It was only released for the consoles. Ubisoft stated they will not be porting it to PC, citing business reasons.[5] 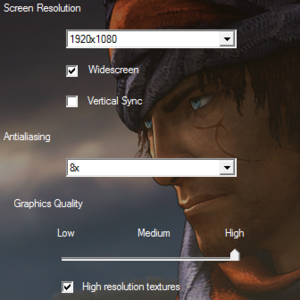 Graphics settings in the launcher. 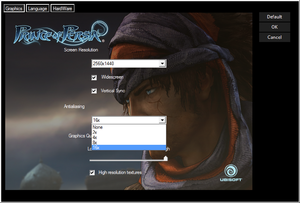 Example of a glitched, 16x AA launcher option. Do not select this option, if you see it.

Steam overlay is not available

Opening the Steam overlay in the retail game causes all input (keyboard or controller) to be ignored, requiring a restart of the game.

The game will fail to launch while the Steam Controller is connected to your computer. This also means the controller isn't compatible with the game. Possibly related to the Steam Overlay not being supported.

Fullscreen mode defaults to 100 Hz, even if the screen refresh rate is set higher than that.

In-game status is not showing in Steam

Game may have slow or choppy motion