Unlock all DLCs in Steam version[edit]

This game follows the XDG Base Directory Specification on Linux.
Configuration are stored separately in the Settings.ini and Settings.sav files. 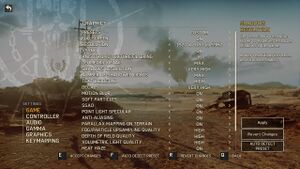 Color corruption may occur if a program other than Windows manages the systems color profile (e.g. f.lux) and the game is run in fullscreen.

WBPlay has issues with Linux 4.9+, causing serious stuttering in Mad Max and Middle-earth: Shadow of Mordor. Feral is aware of the problem and looking for a fix.

Every time the game auto-saves (which is very often), the game hiccups. This happens when the save gets written to the Steam save data location.

The Feral Launcher requires libidn version 1.33 in order to work outside Steam Runtime mode, check if the Linux distribution has it in their repository, normally it would include the version number or a compat highlight, sometimes even both (Such as libidn-133-compat in ArchLinux's/ArchLinux based distro's AUR). If it is not present, it is possible to compile one from GNU's page, which also includes the instruction manual and commands that can be copied & pasted. Bear in mind that you should use sudo command when you wish to install the compiled library.


A much safer option is to use the LD_PRELOAD environment variable in Launch options if you fear that it may replace the recent version of libidn, after you have compiled but not installed it.

Alternatively you can create a symlink of libidn.so.12 as libidn.so.11 using

as superuser/root if the package is not present.