Darksiders II is a singleplayer third-person adventure and ARPG game in the Darksiders series. 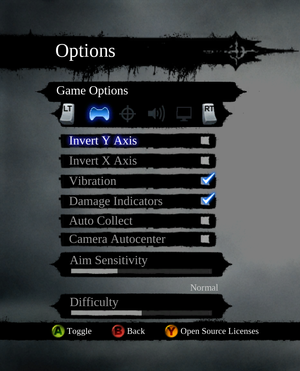 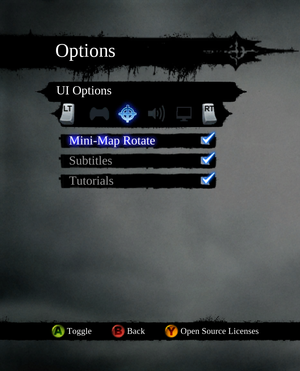 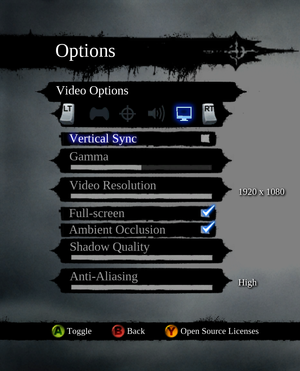 Settings are only available after the cinematic introduction displayed when starting a new game. No real "main menu" before starting/loading a game. 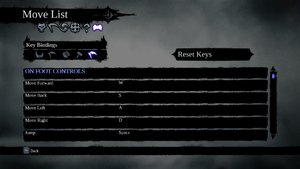 Key bindings menu can be found via the inventory menu: press O, then navigate to the Move List menu.

Some keyboard keys cannot be mapped to game commands, like Delete, or num_del, Insert keys. Also, Arrow keys, END, HOME, PGUP, PGDN, etc. are displayed as "UNKNOWN KEY" then setting it again displays as NUMPAD keys. The "UNKNOWN KEY" can only be bound once. Arrows are functional still after this binding as NUM keys, but any NUMPAD keys cannot be binded as it is seen as already bound. I is hardbound to PAUSE, so that is also not remappable. E is hard-coded and cannot be bound to certain actions (e.g. Move Horse Forward). Additionally if a key is already bound, the action using that key has to be remapped before it can be used. 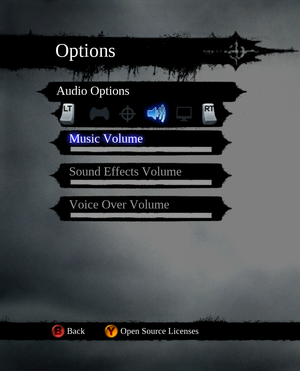 Phasewalker can't be used at the first portal after Lilith[edit]

Return to the main menu and resume the game.

Karkinos does not react to eggs thrown[edit]

Get closer before throwing the egg at the soft part.

Using 3D Vision in the game is subpar to what it could be, with effects and shadows not rendering at the correct depth.

No dialogue voices or subtitles[edit]

Region locked copies may lack voices and subtitles when language is changed to anything other than language native for their region.[4]