From PCGamingWiki, the wiki about fixing PC games
(Redirected from Civilization V)

All Windows and Linux versions require Steam DRM.
A demo is available from Steam.

The Campaign Edition does not support online play; LAN multiplayer can work with other Mac App Store versions, or with the Steam version, if they are the same version. However, they are often updated at different times, so it can be months before they get the same update and are compatible.
The Complete Edition includes all DLC.

Mods are available through multiple distribution channels. Easily accessible through the Steam Workshop, as well as manually installable. Popular sources include CivFanatics.
You must activate a mod after installing in order to make it work. To do so, enter the Mods menu and tick the checkbox next to the mods you want to activate.

Save files are differently named for each OS, but are compatible when saved with the same version. To use them, you will need to rename them.

Requires a resolution at least 768 pixels tall.
Direct3D 11 graphical features, including anti-aliasing, are not available in the OS X and Linux versions of the game. 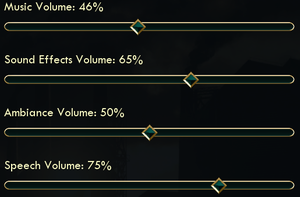 This may be caused by database files and user settings becoming damaged.

Crash after starting a new game

This is particularly important on DirectX 9 or graphics cards with low memory.

If you have a delay in units responding, or the end turn button does not work, try the following:

The game may crash when meeting other leaders.

The latest patch resolves most of the reported multiplayer bugs.

Sometimes players will be dropped after a multiplayer match has progressed for several dozen turns or more. After reloading the game, the player will repeatedly disconnect. This problem can be caused by an insufficient MTU value on the network connection. Changing it before starting the multiplayer game can often fix the problem. To do so, enter the following in the command prompt:

The macOS version is not handled by Firaxis, but Aspyr, after they have been released on Windows. As a result, macOS patches are released later than Windows patches. Different OS versions can not connect in multiplayer unless the versions match, so after a Windows update, it is not possible to play online against macOS until the macOS has also been patched, and vice-versa.

Since the launch of macOS Catalina, the macOS version has been updated to 64-bit only, disabling cross-play entirely unless reverted.[14]

The latest version of macOS in which this works is Mojave, as Catalina can not natively run 32-bit applications.
Disabling the "Gods and Kings" DLC in the multiplayer lobby's options could help if the game crashes after launch.

If the DirectX 11 option is unavailable, try the following.

Ensure Steam is not running in Compatibility Mode.

This may also be caused by out of date drivers.
DirectX 10/11 Mode will not work on XP.
Not all video cards are capable of running DirectX 10 or 11, even with Windows 7. Intel Core i3 integrated graphics do not support DirectX 11 Mode in Civilization V.

Crash and BSOD with DX11 fullscreen on laptops

On some old laptops with a combination of Intel integrated graphics and a pre-GCN AMD GPU, the game will fail to start in DX11 mode if fullscreen is enabled. Such a crash also corrupts some of the internal state of the AMD driver, resulting in a BSOD if you try to start the game a second time, or activate the AMD GPU in any way. The system regains stability upon reboot. This is likely a bug in the AMD driver that will never be fixed due to the end of support for these old GPUs.

Enabling pointer trails in Windows may cause the cursor to disappear or act strangely.

Enabling anti-aliasing on DirectX 11 mode may cause the game to turn black. It is recommended to enable anti-aliasing through graphics software and not the game. If anti-aliasing is enabled and this issue is present (causing the screen to be black), you can edit GraphicsSettingsDX11.ini to fix this.[citation needed]

Sometimes after installing the game, the game resolution will be larger than the screen and parts of the game will be cut off. To fix this, go into options and change the game resolution. If you unable to access the options, manually edit GraphicsSettingsDX9.ini or GraphicsSettingsDX11.ini (depending on which DirectX mode is used) in %USERPROFILE%\Documents\My Games\Sid Meier's Civilization 5 to the correct resolution (1024x768 minimum).

If the game does not run, or will not start most of the time, and nothing else seems to fix the problem, Virtu MVP might be causing the issue. Try unchecking "Civ 5 DirectX 9" and "Civ 5 DirectX 10/11" in the Virtu MVP control panel.

If the game crashes to desktop or loads to a black screen, then there may be an incompatibility with the video files. Deleting the WMV video files from the game directory may allow the game to run, at the expense of losing the opening movies.

They are found in:

"N" and "KN" versions of Windows may not be compatible with the opening videos due to missing Windows Media Foundation; see the general troubleshooting guide.

To fix the audio stuttering when using PulseAudio just follow this guide: Setting the default fragment number and buffer size in PulseAudio

If the issue persists, close the game, run pulseaudio -k and start the game again.

If your game crashes immediately after launching, use the following launch command: LD_PRELOAD='./libcxxrt.so:/usr/$LIB/libstdc++.so.6' %command% or: LD_PRELOAD=/usr/lib32/libopenal.so.1 %command%

If the game crashes to desktop randomly while in game with a Ryzen CPU, modifying the MaxSimultaneousThreads setting in the config.ini file can fix this issue. For 8-core Ryzens, setting the value to 16 can fix the issue.