Age of Empires II: The Age of Kings

SafeDisc retail DRM does not work on Windows Vista and later (see above for affected versions).
Free demos are available for The Age of Kings and The Conquerors Expansion.

1.0e includes exploit fixes, a fix for a rare issue with missing permissions when overwriting files, a no-CD patch and a version switcher. The uninstaller cleanly reverts to the official 1.0c version.
UserPatch: Conquerors Feature Update adds many fixes including widescreen support, UPnP port forwarding, and various optional tweaks. If it is installed on top of v1.0e, no CD is required.

Forgotten Empires is a mod which adds new civilizations, campaigns, maps and other fixes.
It was later made available as offical DLC for the HD Edition and is included by default with the Definitive Edition - as a result, the mod version is no longer supported. 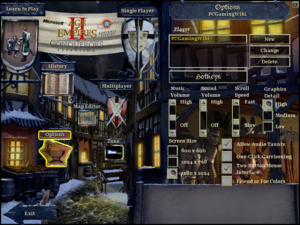 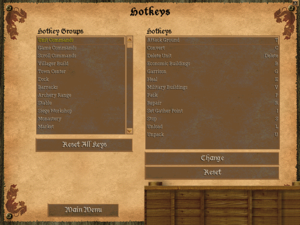 On some older Dell laptop models (e.g. the M1530) an issue occurs where the OS crashes and a blue-screen of death is displayed. This issue occurs after a seemingly random amount of gameplay time (from <30 seconds to 10 or 20 minutes). Many things have been tried to fix the issue including changing graphics card drivers, limiting the frame rate to mitigate overheating and running on virtual machines of different operating systems (e.g. Windows 98). As far as can be seen, this issue has never been resolved nor will it be, rendering AoE2 unplayable on the affected models of laptop. This issue can be mitigated by playing through Voobly.com game client and selecting 32-bit DirectX mode in the lobby options. It is actually caused by an unterminated loop in the graphics card driver. However, Age of Empires II HD (the re-mastered version of the game released in 2013) is unaffected by this problem.[citation needed]

Install UserPatch to fix this for The Conquerors (this does not fix the issue for the base game).[citation needed]

Windows Vista and 7 can have issues with displaying true colours in Age of Empires II correctly.
This issue does not occur on Windows 8 and later.
See DirectDraw troubleshooting for further details.

This method allows gaming over LAN on modern versions of Windows.

500 MHz is required for online play.

500 MHz is required for online play.
When applying the UB patch, the minimum supported OS is 10.3.9.