X-COM: Apocalypse is a singleplayer bird's-eye view and isometric strategy game in the X-COM series.

To improve DOSBox performance, make some changes to the DOSBox configuration file.

Additional mods and other files for Apocalypse can be downloaded at StrategyCore here.

An open source reinterpretation of the game's engine that's currently in a pre-alpha state.

Further details can be found on the project's official website, GitHub repository, and project forums. 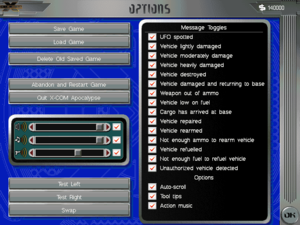 The Steam version sometimes asks you to insert the CD into the drive. When it does so, the game can't be resumed.

This game has issues with certain SVGA cards (both real and emulated). It can be fixed by using this patcher. Note this program requires Windows and will not run in DOSBox.

Certain versions of the game shipped without the map files for the Alien Dimension. They can be downloaded here.