Menus layout and settings may vary according to real world time and game save. Article contains minor spoilers.[1]
Frame rate is capped at 30 FPS.[2]

The Collectors Edition includes the game and a number of physical goods. 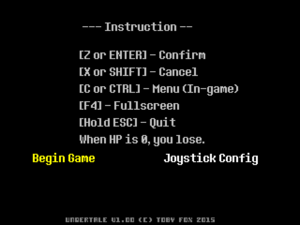 General settings. Joystick config and game start are invisible if no controller is detected. 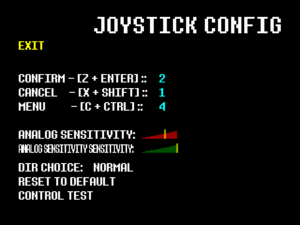 Game window displays only white color (audio is playing, but nothing is visible).

Game plays no audio and is unresponsive, window displays

When OpenALSoft is installed, audio fails to play on Windows[edit]

Game plays no audio and is unresponsive, window displays

A utility that automatically removes the permanent effects of a Genocide (or No Mercy) Route.

Details and download links are available through the author's site (archived)

A Lua-moddable Undertale-based engine that allows for custom content to be created with the game's artistic style and gameplay.

Further details can be found on the engine subreddit.