Deltarune is a RPG by Tobyfox and it is a "parallel story" to the highly acclaimed Undertale.[2]

The game's initial release was "SURVEY PROGRAM", a free executable downloaded from the game's official website on October 31, 2018, which included Chapter 1 for the game.[3] Chapter 2, which was also released freely on September 17, 2021, released on Steam and itch.io instead.

Chapters 3 to 5 are in development and set to be paid releases in future.[4]

The free version will instead use the following Proton path: <Steam-folder>/steamapps/compatdata/1690940/pfx/

The free version will instead use the following Proton path: <Steam-folder>/steamapps/compatdata/1690940/pfx/ 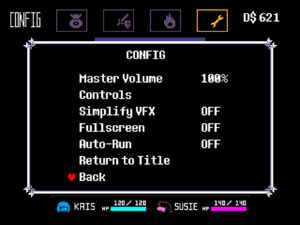 General settings. Menu is unavailable during parts of regular gameplay.

Back up the original data.win before applying this hack. 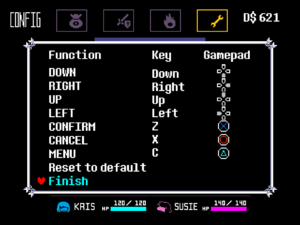