The Operative: No One Lives Forever

The source code was made available in 2001.
Exceeding 60 FPS introduces various issues.

SafeDisc retail DRM does not work on Windows Vista and later (see above for affected versions).
The game is not sold digitally due to various legality issues with several parties.
A demo is available.

The Game of the Year Edition comes with its unique version 1.004 and includes new multiplayer maps and a unique singleplayer mission that takes place after the main campaign. The original release can be patched to be compatible with the GOTY release online, and its multiplayer maps were officially released as a download, but the singleplayer mission remains an exclusive.
The 2002 PlayStation 2 release contains its own unique mission which was never ported to the PC.

Fixes some long standing bugs and updates some more outdated features of the game.
For Multilingual version see 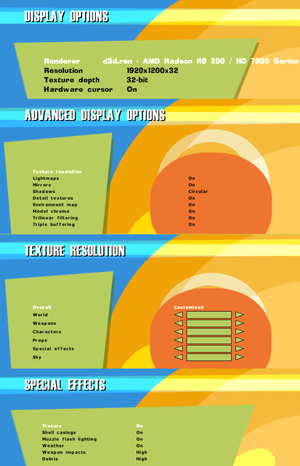 Natively the game stretches on widescreen while the menu and interface are pixel-based.

There is an issue with saving custom keyboard binds on localized Windows version (or on localized keyboard layouts). Manual keys mapping is required.
Mouse buttons and scrolling wheel is not assigned to any action.

Note: These numbers are for US keyboard layout (QWERTY layout).
If you defined another layout (e.g. French AZERTY layout), you should perform the transposition yourself.
For example, to bind the 'A' key using the AZERTY keyboard layout, you should use the number ##16 (the 'Q' key in table below).

EAX / A3D support information: Even if the libraries for A3D and EAX v1 and 2 are indeed included in the game root, when checking sound logs, there are no 3D sound calls, and the game's settings don't provide any options to enable 3D sound, so their inclusion as libraries is seemingly only for convenience, being a part of the Miles Sound System libraries.

Installing the game on a 64-bit OS[edit]

The regular version of the game (not the GOTY edition, which is an improved setup and prepatched to 1.4) uses a 16-bit setup executable which will not work on 64-bit operating systems.

Mouse input is erratic or unresponsive[edit]

Slowdown with some UI elements[edit]

Occurs when picking items up, looking down scope, or switching weapons.

This is due to Intel's onboard graphics not liking Direct3D/DirectX7. This also fixes missing screen effects.

Graphics are glitched and game is practically unplayable[edit]

The game may crash with a Client MFC Application has stopped working error message with Nvidia G-Sync enabled.

Game runs slow, and text has black boxes around it[edit]