From PCGamingWiki, the wiki about fixing PC games
This page may require cleanup to meet basic quality standards. The specific problem is: Make the pages between the first and second game consistant, add screenshots and move some things. You can help by modifying the article. The discussion page may contain useful suggestions.

Not necessary for Steam version.
Widescreen fixes will break the minimap location reporting, which can be solved using the UI fixes.[8]
Widescreen fixes resolutions of 1366x768 and under will not display dialogue option text correctly and are unplayable.[9]
Video tutorial for widescreen available here
This uses a slightly older version of the game with some bugs (not necessary for the GOG.com version).[10]

Ultra-Widescreen fixes will break the minimap location reporting, which can be solved using the UI fixes (instructions included below).
Using Flawless Widescreen can cause memory leaks, which in turn can corrupt the current save file.

This method does not work on latest game version.
Guide located here Archived (it is not necessary to edit your .bik files)
Requires the No-CD cracked executable, used in the above Widescreen fix. 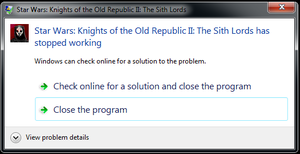 Stuttering or Freezing after combat / Unable to move the character[edit]

This can be fixed by limiting maximum frame rate.[16]

After applying a widescreen resolution, the HUD elements will be stretched.

KOTOR and TSL Save Game Editor (English Language Only), also known as the 'KSE'.
Save game editor (cheat) works for both KOTOR 1 and 2.
The save game editor doesn't automatically detect the Steam version of KotOR2.