From PCGamingWiki, the wiki about fixing PC games
This page may require cleanup to meet basic quality standards. The specific problem is: Move external instructions on the wiki article itself, host external files on the wiki and make the pages between the first and second game consistant. You can help by modifying the article. The discussion page may contain useful suggestions.

The soundtrack is stored in MP3 and WAV format, however junk data at the beginning of each file prevents them from being played back in media players. Run this script[Note 1] from the game's music directory[Note 2] to create standard music files that can be played back in most media players.[2]

Not applicable to the Star Wars: Knights of the Old Republic Collection DVD release or the digital versions via Steam, GOG.com and Origin.

A compilation of essential bugfixes applicable to the latest official patched version of the game.

Fixes numerous bugs and improves the game contents.
Easy to install.
If using other mods for KotOR, it's recommended to install this Community Patch first.
Incompatible with KotOR 1 Restoration. Choose one of the two. Both include most bug fixes. 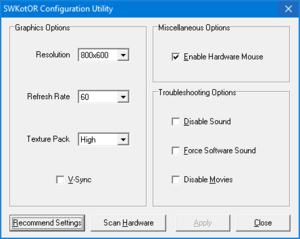 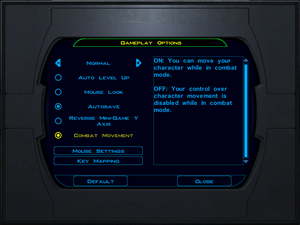 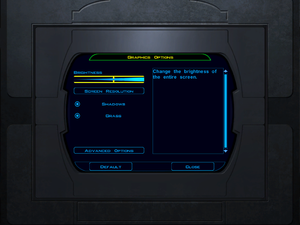 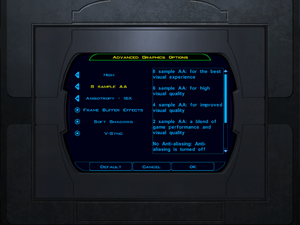 Running the game at more than 60 FPS can cause issues, such as causing the player character to be stuck after combat. Capping the frame-rate at 60 FPS is recommended. 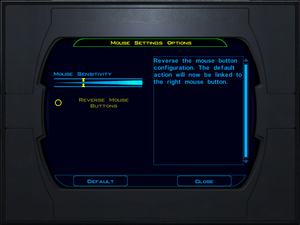 Controller is not natively supported. 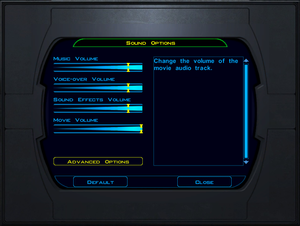 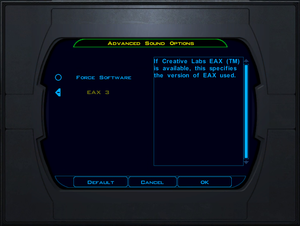 UI for widescreen is to small and glitches out

Some users may have problems installing retail versions. Installation should be done with an administrator account for best results.

Game crashes when a movie is played

This issue occurs due to poor support for older OpenGL implementations in several versions of AMD Catalyst Display Driver.

There are two ways to resolve this:

Unable to move your character after combat

Game minimizes after escaping Taris and refuses to maximize again

Some users experience this issue after boarding the Ebon Hawk for the first time and are thus unable to progress past Taris.

If using the widescreen patch, the game may display a black screen while playing cutscenes.

Cannot use your mouse in main menu

The game is offcenter

Options for Frame Buffer Effects and Soft Shadows are greyed out

This special patch restores a small bit of cut content left over by the developer while fixing the remaining bugs found within the game.

Restores cut content. Complete list here.
Adds Impossible Difficulty; a cut option for KotOR difficulty, making the game feel harder.
Versions 1.8 and higher of Community Patch aren't compatible with K1R. Choose one of the two. Both include most bug fixes.
Although optional, it's best recommended to install the Restoration mod first before adding other mods.
To prevent a rare bug with the current version of K1R, where a certain NPC becomes invincible, put this file into <path-to-game>\Override after installing the mod.[17]

This mod prevents the vanishing of corpses of dead enemies.

Various resolutions of AI-upscaled cinematics to replace the originals. All cinematics are brought to 60fps and are available in 4k, 1440p, 1080p, 768p, and 720p.
The cutscenes were upscaled using Topaz Gigapixel AI, and interpolated to 60fps using SVP Pro 4. Black bars are used to maintain the aspect ratio of the content while bringing the videos to 16:9 overall.
If you're using the Steam version, you may need to get a replacement executable to be able to open it with the HEX editor or UniWS, or for the correct values to appear.

Changes vanilla textures to 4x AI upscaled with hand made improvements.
In the final (v1.0) release almost all game textures (all except GUI, icons, effects and etc. which have problems when extracted or have no benefit from upscaling whatsoever) are replaced with upgraded ones. Current version (v1.1) has more than 2300 textures.
All alpha channels in textures were checked and copied to new textures.

All character textures, upscaled with ESRGAN.
Transparency issues with the legacy pack have been fixed in REDUX.[18]