Can be run under ScummVM.
The manual is required to pass the in-game DRM. It comes bundled with all digital versions of the game

All games in the pack are pre-configured to run with DOSBox.[3]

For the Steam release only

An alternative launcher for the Steam version of Space Quest Collection. It allows for both versions of Space Quest: Chapter I - The Sarien Encounter to be launched through the same launcher, and some minor UI and quality-of-life improvements. It also fixes launch issues with the VGA remake of Space Quest I that were present in the legacy launcher.

It can be downloaded from the series Steam Community Discussions. 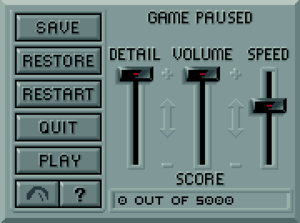