The Windows 3.x version of this game does not work on 64-bit versions of Windows (see Availability for affected versions).

Can be run under ScummVM.

All games in the pack are pre-configured to run with DOSBox.[3]

This section may require cleanup to meet basic quality standards. The specific problem is: Need to login to vogons to download. You can help by modifying the article. The discussion page may contain useful suggestions.

Replaces the CD version's visuals with the floppy version's, where deemed superior.[4]

For the Steam release only

An alternative launcher for the Steam version of Space Quest Collection. It allows for both versions of Space Quest: Chapter I - The Sarien Encounter to be launched through the same launcher, and some minor UI and quality-of-life improvements. It also fixes launch issues with the VGA remake of Space Quest I that were present in the legacy launcher.

It can be downloaded from the series Steam Community Discussions. 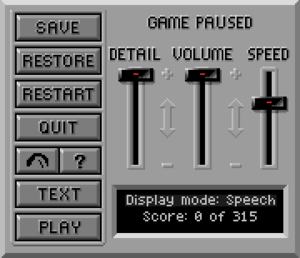