A controller is highly recommended for gameplay.
Graphics settings are limited to a single set of presets; further configuration is possible via a file, see Graphics adjustment. 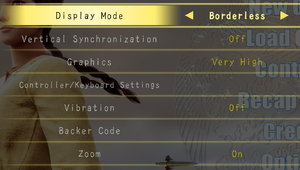 Game softlocks when saving and sleeping at 10:59 PM[edit]

The game can softlock when saving at 10:59 PM in-game time and immediately proceed to go to sleep.[12]

This allows to create a mod for the game that reads a custom engine .ini file you can put any console/config tweak into and have it read by the game in just a few clicks. Outside of using the UE4 console enabler and inputting commands on every startup, this is the only known way to make them permanent.[7]

LemonHaze has compiled a series of mods at the ShenmueDojo.
Instructions included.
Download link

These include: - Classic Camera Mod

- No Energy drain while running

- No Walk Only triggers