A faithful, higher quality icon can be found on DeviantArt.

The Gold Edition (known also as Totally RollerCoaster in Europe) includes the base game and both expansion packs.
The Deluxe Edition is a variant of the Gold Edition that comes with a unique executable (1.20.015 as opposed to patched Loopy Landscapes' 1.20.013) that is more resilient to common trainers. It also comes bundled with many custom track designs from the old official website's ride exchange section. It was originally only released in North America, but digital releases are based off this version.

The 2003 Deluxe release, as well as all downloadable versions are already patched to the latest version.

There are two official roller coaster collection downloads from Chris Sawyer, both available via his website. While the "Cat" collection can be used in any version of the game, the "Phobia" collection can only be used in conjunction with games that have either the Corkscrew Follies/Added Attractions or Loopy Landscapes expansion packs.

Play without a CD (Loopy Landscapes)[edit] 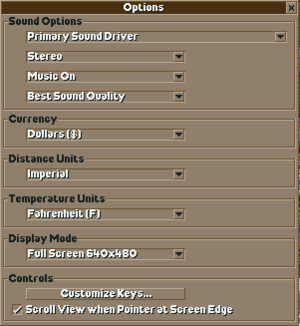 The downloadable versions are already patched to be compatible with modern systems. The fixes below are for the original release.

Another save game issue can be caused by not running the game as an Administrator. To fix this, check the 'Run this program as an administrator' option from the Compatibility menu (right-click .exe > Properties > Compatibility).

In Windows XP and above, after the game is closed, the left mouse button might seem unresponsive as it is still assigned to the game process. Repeatedly right-clicking (preferrably in an empty section of the desktop) will "release" full mouse control. On Windows 9x, this issue does not seem to appear as the game process leaves an "empty" tab in the taskbar that is closed by a single click.