From PCGamingWiki, the wiki about fixing PC games
This page may require cleanup to meet basic quality standards. The specific problem is: Verify instructions and fixes against the latest version, make fixes cross-platform in description. You can help by modifying the article. The discussion page may contain useful suggestions.

A combination of bug fixes, many small mods, better AI and AI armies, more provinces, graphical improvements and many other campaign and battle map changes. The whole game now offers a much greater challenge!

A total conversion mod that brings you to the world of Middle-earth during the Third Age. Includes both a standard campaign mode and a Fellowship of the Ring campaign that follows the events of the books. 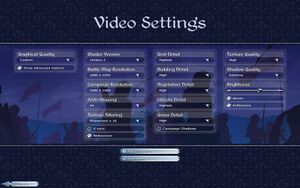 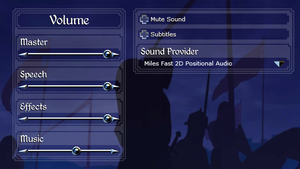 Retail base game does not work[edit]

The retail version of the base game does not work on Windows Vista and later due to SafeDisc support being discontinued.[2]

Because of a missing semicolon in the game files, the AI hates you more if you peacefully occupy something than if you sack it. See here for a fix. This will make diplomacy more viable and decrease the frequency of wars.[11][12]