The unofficial 2.3 Players Patch fixes many bugs and glitches, but also introduces some minor gameplay changes. Install at your own discretion. The entire changelog can be found here. The Steam version can be installed via the Steam Workshop, the GOG version can be downloaded here.

When using the GOG version, you have to launch the game from the new provided shortcuts - read the instructions file after unpacking the patch. 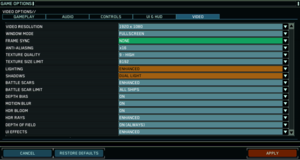 If the GOG version doesn't start when launching the game from GOG Galaxy, try starting the launcher from Homeworld Remastered\HWLauncher\launcher.exe.[1][2] You can also set this as default location for GOG Galaxy by clicking Manage Installation -> Configure -> Scroll to the bottom -> Add another executable / arguments, and then select the above mentioned linked as default.

If the game doesn't start or crashes with a access violation message, run your .exe as Admin (right-click -> Properties -> Compatibility).