DirectInput FPS Fix should be installed, particularly for players with Logitech hardware, to prevent FPS drops.

A demo can be downloaded here.

The Condemned Widescreen Fix can change the folder locations to %USERPROFILE%\Documents\Monolith Productions\Condemned\, making it possible to sync to Steam Cloud. 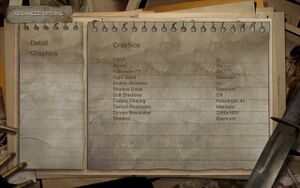 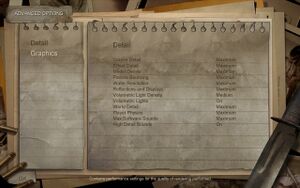 Normally the game is stretched when using widescreen.

Doesn't include the normal maps, so textures look flat and unnatural.

A fix is required to assign triggers on the Xbox 360 Controller.
May not be compatible with the DirectInput FPS Fix.

Savegames doesn't load from main menu when you do an "Exit to title" after playing. The first time you load the game from title works fine.[8]

In particular, the train sounds at the end of chapter four are missing.[9] The footage from "The Dark" game prototype is also corrupted.[10]

Some settings can't be saved unless the game is launched as administrator.

This is due to the features of the engine and the artificial limitation of the simultaneous use of anti-aliasing with soft shadows, since they can cause graphic artifacts on the shadows.

Occurs only on Windows Vista and Windows 7 because of the special graphic stack WDDM.