This page is for the HD version. For the original version, see Acceleration of SUGURI.

This re-release is based off the PlayStation 3 port of Acceleration of SUGURI X-Edition originally released in 2011, which combines the original PC version and its expansion pack into one game. Compared to the original Acceleration of SUGURI, it features the ability to rebind keyboard controls, higher resolutions with widescreen support, and the ability to choose between the original or redrawn HD graphics, however, some of the game's assets are still low resolution, even with the HD graphics. It was initially released through DESURA on June 25, 2012, unfortunately, it had bugs and glitches that were not present in the original release, such as compatibility issues with Windows 8 or later, replays not working correctly when played in different resolutions or aspect-ratios, frequent crashes when launching the game, among other issues.[1] It was later re-released through Steam on July 1, 2014, with many of the same issues from the DRM-free release while introducing new ones, such as connection issues with online multiplayer, and broken Steam Achievements.[2]

A patch was later released silently on August 24, 2014 for the Steam version.[3] It addressed most of the game-breaking issues and implemented better support for XInput controllers, however, there are inaccuracies and issues still present compared to the original Acceleration of SUGURI, such as the broken Steam Achievements and incorrect music playback with this version. Contrary to what the game's system requirements states, it also still uses DirectX 8.1 as with the original version of the game, causing the game to crash when played on resolutions above 1080p unless a workaround with dgVoodoo 2 is used.

system_x.dat is the save data; ranking_x.dat stores high score data.
system_x.dat from the original Acceleration of SUGURI is compatible with the HD version. 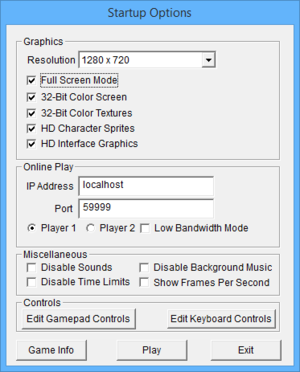 dgVoodoo 2 fixes the game crashing when played on resolutions above 1080p by tricking the game into running in higher resolutions.
Can cause a minor issue where the framerate drops during the victory screen when displayed in very high resolutions. 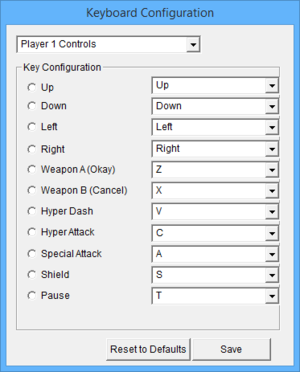 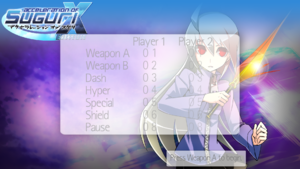 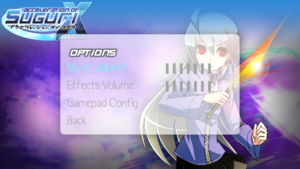 Crashing with resolutions higher than 1080p[edit]

Randomly crashes to desktop when launching the game[edit]

The game may crash when attempting to launch the game, especially in the DRM-free version.[1]

Replays are not playing properly[edit]

The replay files may not play properly when switching between different resolutions and/or aspect-ratios.[1]

Some music tracks do not loop properly[edit]

A couple of the game's music tracks, such as Rendezvous (Hime's Theme), does not loop properly like in the original Acceleration of SUGURI and play a short portion of the track as a result.[5] This is how the track is supposed to sound: YouTube.

Certain Steam Achievements does not unlock[edit]