Performance is fairly poor on modern operating systems, with multiple issues with the way that the game window is rendered and movie compatibility.
Fixes listed on this article make the game playable, but the experience is relatively unfriendly.

Demos are available from ResidualVM.

Patch 1.61 adds an external configuration tool along with some bug fixes. This patch is for retail releases only.

Patch can be forced on other versions by using an archive utility to extract the files. Just to have audio, you must convert iss files to ogg (audio only) format using vorbis codec and rename format to ovs. That's working!

The only problem is the lack of character encoding other than the English version.

You can run The Longest Journey with the ScummVM daily builds with most bugs fixed, including antialiasing problems; however, be wary of any remaining issues. As of 2019, this remains the only way to run the game on OS X, Linux, and other operating systems. Link here.

The Longest Journey HD mod is an AI upscale mod for TLJ. The mod includes neural network upscaled backgrounds and sprites, redrawn user interface and it works on all modern systems without any issues of the original game.
This mod uses ResidualVM framework to load new assets. The development of ResidualVM has been stopped, and the project's functionality is now a part of ScummVM[4]. ResidualVM remains a working solution, but if any bugs occur when running the mod (e.g. incorrect word wrapping in menus with "..." replacing parts of labels), try using one of the latest ScummVM daily builds instead. 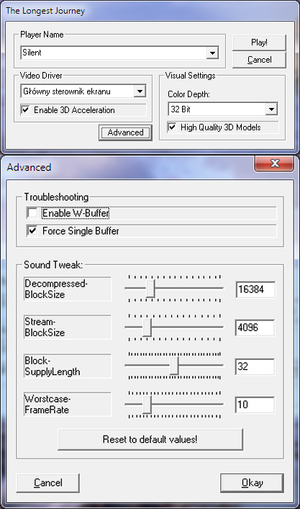 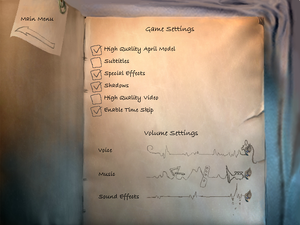 No native option to run in windowed.
Game only runs at resolution at 640x480 (whether fullscreen or windowed)
Game window cannot be moved or manipulated, and there are no fixes for this issue.

When exiting the game, the confirmation dialogue is blank. This appears to only affect Windows 10.

Default fonts can be very difficult to read.

Issue with not being able to view the Bink-encoded movies.
Issue with not being able to display a game window (black screen).
The fixes work for most people, but others have persistent problems and cannot get the game to work properly
Versions prior to 1.61 do not have a separate Configure.exe utility.
(These versions have options presented when the game is launched instead.)

On some graphics cards, the game will crash upon entering the Police Station.

If you find the patch is unable to be installed (for example, with the GOG.com version of the game), you may be able to fix the crash by changing some options on the game's launcher:

This solution isn't perfect, you may still see mouse trails (they clear each time a mouse button is pressed.)
Enables running the game at higher resolutions and with anti-aliasing on cards that aren't supported by the game directly.
Uses an emulated GPU.
Any GPU driver profile for Longest Journey should have anti aliasing disabled.
The game's "High Resolution April Model" option must be enabled.
Allows use of ReShade for additional post-processing.