This page is for the Director's Cut. For the original release, see Strike Suit Zero.

The Director's Cut includes updated graphics, a restructured campaign as well as the Heroes of the Fleet and Raptor DLC of the original game.
Multi-monitor options can't be changed during a mission.
Mods for Strike Suit Zero don't work with the Director's Cut. 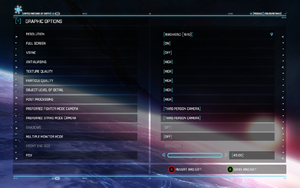 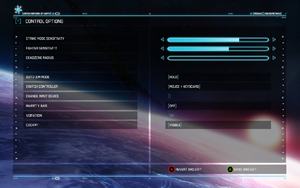 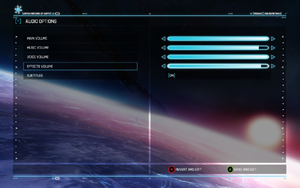 In missions, the FOV is always higher by 8.4 than set in option menu. This can be seen in a mission when you open the options menu.

The developers had planned to update the game with a more detailed shadow solution. However, due to various issues this was never fully implemented, despite the setting being available in the graphics menu.[1]

For some users the game does not go above 50 fps. While the reason for this is unknown, a workaround for Nvidia users is to leave the GeForce Experience window open in the background.[2]
Another confirmed solution is to use a hardware accelerated media player like MPC-HC, play and then pause a video file (like those found in <path-to-game>\pc\main\Video\) and keeping the player open before starting the game.[3]

Not in fullscreen after task-switching[edit]

Sometimes after using Alt+Tab ↹, the game is stuck in windowed mode.