Silent Hill 2: Director's Cut is a survival horror game developed by Team Silent, ported by Creature Labs, and published by Konami. It is the second installment in the Silent Hill series.

The game was originally released for the PlayStation 2 on September 21, 2001 worldwide. The game later received an extended Director's Cut version on PlayStation 2 as a Greatest Hits re-release, Xbox, and PC, which added a new Born from a Wish scenario, a secret UFO ending, and for the PC version, a quick-save function, real-time weapon swapping, and a movie gallery. The PC version also features improved flashlight lighting like in the Xbox port, however, it also has a number of inaccuracies, missing or downgraded effects, and lower audio and FMV quality than previous versions.[1] It also has compatibility issues with newer versions of Windows and hardware (see here for details).

There have been growing efforts by modders to fix the issues with the PC version, starting with sh2proxy by emoose to address compatibility issues and implement widescreen support for the game. It has since been succeeded by Silent Hill 2: Enhanced Edition, a community-driven project for the PC version that restores features from the original PlayStation 2 version, adds support for HD and widescreen resolutions, improved controller support, and other quality-of-life improvements.

All improvements in this section are included in the full installation of the Enhanced Edition project.
Silent Hill 2: Enhanced Edition is a collection of unofficial mods which implement widescreen resolution support, add PlayStation 2 quality audio and fog that were missing from the PC version, provide upscaled images and FMVs, improve controller support and much more.

This fix should not be combined with the Silent Hill 2: Enhanced Edition project.
A fix which adds new features and fixes some bugs. 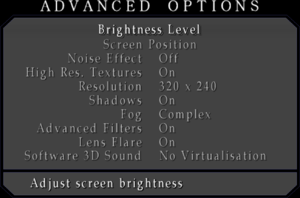 Use Silent Hill 2: Enhanced Edition to restore the language selection in the options menu.

The game shipped with a buggy, beta version of CRIWARE audio middleware. Silent Hill 2: Enhanced Edition comes with a custom reimplementation of this audio engine to fix the issue.

"Insert a disc" message appears during the ending[edit]

In rare situations, the game will look for "end.bik" instead of "ending.bik" for the credits video. If that happens, this error will occur.

This replaces the original voice acting with the new voices from the Silent Hill HD Collection release.[11]
The HD Collection voices are very divisive and often considered to be inferior to the original voice acting.
The HD Voice Pack includes and integrates the Audio Enhancement Pack and FMV Enhancement Pack from the Silent Hill 2: Enhanced Edition project for its audio improvements.

sh2pc.exe may have no icon set by default.