The latest official patch is version 1.3, which can be found here. Note that the digital releases are fully updated, thus the update file is unnecessary on said version. An unofficial 1.4m is also available for download here. The original thread where it was discussed and created (download link dead) can be found here. There is also a 1.4n patch here, which is slightly newer than 1.4m. Note that 1.4n requires 1.4m to be installed first.
In addition to the above there is a fix that adds Gravis UltraSound support available here. For more info on getting GUS working, see DOSBox. A map editor is also available here. 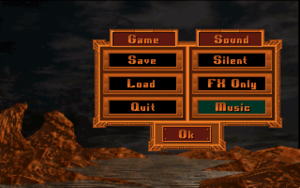