A later version known as the "Gold Edition" was released which improved the graphics on the original game. It also came fully updated (version 1.2).
Interstate '76 was once bundled with Microsoft's Sidewinder Force Feedback Pro controller line up under the name "Sidewinder Force Feedback Pro Edition" (version 1.06). These copies often were bundled with graphics and computer manufacturer's hardware.

You can find updates to the original retail, including the Gold edition patch, here. Note the GOG.com version is fully updated, thus these are unnecessary if purchased from there.
Nitro also has a Patch I & II, though these were only ever beta. Instead use the Unofficial Nitro Patch IV. 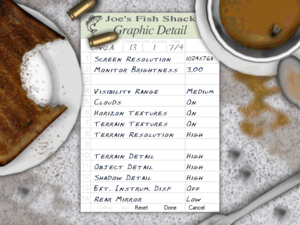 Frame rates higher than 30 FPS (24 FPS in some cases actually) cause stuttering, physics and enemy AI problems.
Force a frame cap in your graphics card control panel.
Nitro Pack users can get around this by using the NITRO.EXE-30FPS PATCH.
A similar patch for the base i76 game (GOG.com only) by user immi can be found here. 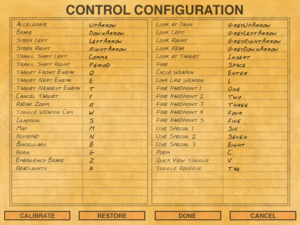 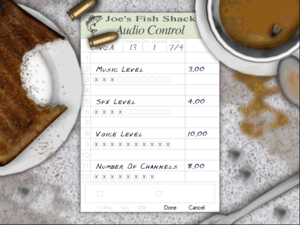 Open up the file database.mw2 (.tvf in Nitro) in a hex editor and find the last two "RIFF" extensions. Change them to something else, such as "PIFF". Alternatively, download this (or this for Nitro) pre-patched version.
Disable hardware acceleration for audio devices or disable sound in game.

A German website has a custom installer here. It also includes and installs the patches, up to the Gold Edition.
The setup.exe wont run on 64-bit computers due to the fact that 16-bit compatibility and DOS support was removed from theses versions. Luckily the files on disk are not compresses and can merely be copied over.

This is a bug in some glide wrappers. Reduce the texture memory to 2MB to get around this.
If you are running a real VooDoo card, add the following to a batch file followed by the game's executable: