This page is for the original release. For the re-release, see Dark Souls II: Scholar of the First Sin.

The default controller deadzone is handled poorly compared to every other game in the franchise. 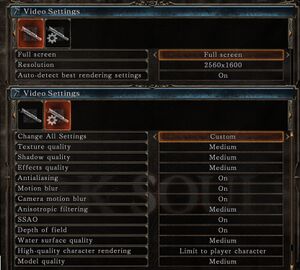 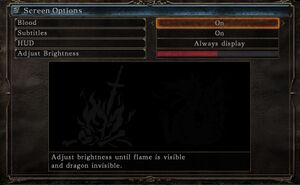 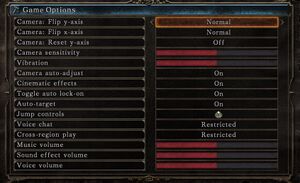 The game is always displaying Xbox button prompts regardless of real input scheme thus making very hard to navigate menus.
Fortunately the game is also accepting in-game actions what would be bound on Xbox controller buttons. Use this as a reference guide.
Actions listed below can be bound to the same key.

Delay between mouse clicks and actions[edit]

You can bind some of your actions to mouse double clicks, however this feature is causing slight delay between single click and its action as the game is waiting for another click.
An option to disable double-clicking functionality was added in one of the patches, but it's bugged and doesn't persist after you exit the game.

Fullscreen mode forces 60 Hz refresh rate even if your monitor supports higher than that.

If playing with a controller, the mouse cursor will always reappear in the middle of the screen, even if not in use or relocated.

When using an original Xbox 360 controller, your game freezes when struck or fat-rolling (actions that activate rumble).
This may be caused by previously using MotionInJoy and even after the uninstall, your controller will still be labelled "MotionInJoy Virtual XInput Device for Windows"

This issue should be fixed in patch from April 28, 2014. Try following fixes if your copy still crashes even after the patch.

Not required for Chinese, Korean, or Russian setups.[citation needed]