From PCGamingWiki, the wiki about fixing PC games
(Redirected from Company of Heroes: Tales of Valor)

Online multiplayer for non-Steam versions stopped working in December 2013, due to Quazal services being shut down.[1]
Steam and retail (Legacy Edition) mods are not mutually compatible.

Soundtrack is available for free here.
Free demo versions are available from GameFront.

The New Steam Version (included alongside the original THQ release, now referred to as the Legacy Edition) has all the multiplayer components modified to use Steamworks, as the original multiplayer servers are no longer available. Opposing Fronts and Tales of Valor count as DLC and do not require any extra downloads.

They are purchased together on Steam, as the Legacy Edition was kept to maintain compatibility with classic mods.

The OS X release of the game, it includes the Opposing Fronts and Tales of Valor expansions.

Note that multiplayer is not included.

Patches for the retail version of the game can be found the official site's archive (requires a torrent client), Patches-Scrolls or GameFront (retail only). Most of them are incremental, and need to be run in order. 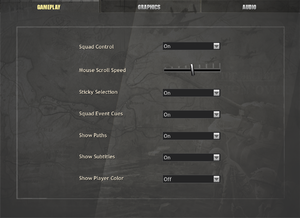 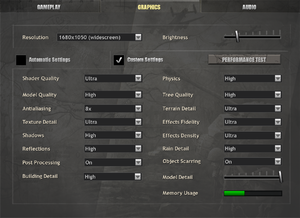 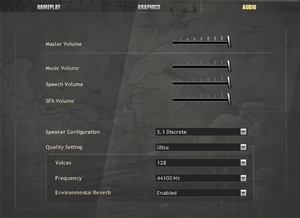 Stuttering when playing with DX9 or High Shader Quality

The game may not choose the highest refresh rate supported by the screen.

The latest Steam version of this game won't start on some systems, crashing back to the desktop immediately.

The game will crash when loading into any map. This is possibly caused by SLI/Crossfire cards.

When launching the game on a dual screen setup, the secondary monitor will often be blacked out.