This page is for the original version. For the enhanced edition, see Blade Runner: Enhanced Edition.

The DVD-ROM version has the same content as the CD-ROM version without the need to swap discs.
The GOG.com release does not include the original desktop icon. A replacement can be found here.

This method does not require an external installer or installation of any additional patches.

Allows installation from the CD/DVD releases on 64-bit Windows.
Automatically installs both the official patch and the wrapper.
Doesn't copy the file HDFRAMES.DAT so it needs to be downloaded from here or copied from the game disc to <path-to-game>.

Fixes timing issues with the shooting range and "rat in the tunnel" portions of the game. 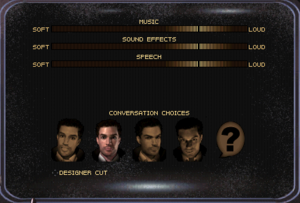 Game will crash on start if computer does not have an optical drive mounted.

In Windows 10, opening the ISO will create a drive automatically.

On modern CPUs, shooting range targets never appear or take minutes to. A similar issue occurs with the "rat in the tunnel" portion of the game.

Save games not working