From PCGamingWiki, the wiki about fixing PC games
This page may require cleanup to meet basic quality standards. The specific problem is: Check the proper framerate limit (30 or 60?), and set things straight with PhysX issues. . You can help by modifying the article. The discussion page may contain useful suggestions.

Bionic Commando (2009) is an action adventure game developed by GRIN using the Diesel engine and published by Capcom. The game features both a singleplayer campaign and a multiplayer mode, though as of 2022 the online mode is no longer available due to the closure of its online servers.

The player controls Nathan Spencer and his main characteristic is the ability of using his Bionic Arm, which allow him to swing around buildings and throw objects. The game mixes fluid traversal movement and packed action gameplay with multiple firing weapons and type of enemies on a level based structure.

The game is part of the Bionic Commando series that has started with the homonymous NES title in the 1987, which received a remake called Bionic Commando Rearmed that was developed by GRIN aswell. 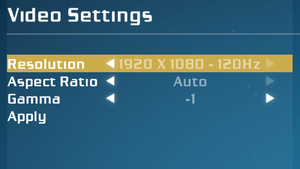 The game physics breaks at a framerate higher than 60 (e.g. the throw mechanic doesn't work properly, and ghosting on the main character soft materials).

Cap the game at 60 FPS or lower to fix it (Special K is recommended for optimal results).

Don't Alt+Tab ↹ after starting the game otherwise it will start to stutter constantly after going back in-game. 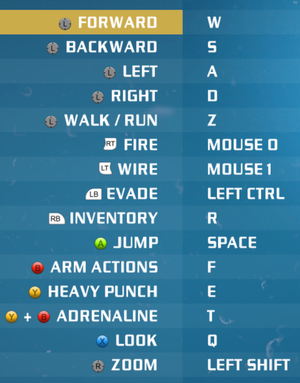 Input device is selected by pressing either ↵ Enter or Start button at the start screen, which disables the other device from that point on.
The game uses Xbox controller prompts for keyboard and mouse, no fix available.

Bind all secondary weapons to one key

Since you can't have multiple secondary weapons at the same time (in the single player mode), only one key is needed.

The game allow to skip cutscenes by pressing "Enter" after you press "Space".
For an easier configuration you can modify this behavior by let the game skip the cutscenes after a second press of the "Space" button.

The game allow to select the specific entries of the "Info Screen" (Objectives, Challenges etc.) by pressing the "Enter" button.
For an easier navigation you can modify this behavior by let the player select those entries with the press of the "Space" button.

In-game mouse movement speed depends on the framerate, the lower is the framerate and higher is the aim speed (in a proportional way so 60 FPS is double the speed of 120 FPS, 30 FPS is four times the speed of 120 FPS and so on). This results in a very difficult mouse control on a lower framerate (e.g. 60 FPS).
To fix this is suggested to lower the in-game aim sensitivity at the minimum level and then adjust the aim speed accordingly with the mouse DPI settings (800 DPI is enough for accurate gameplay at 60 FPS with the in-game aim sensitivity at the minimum level).

At higher framerate (100+ FPS) this issue tend to be a lot less prominent, it's still suggested to lower the in-game aim sensitivity accordingly.
It's very important to cap the game framerate at a maximum of 144 FPS anyway due to physics issues, see "Frame rate (FPS)" for more info.

The Y axis is roughly 40% slower then X axis.
It's possible to have a workaround with mice that support separate DPI sensitivity per axis or more simply by editing the controls.xml